Sreesanth Heaps Praise On Vijay Sethupathi, Calls Him 'Man With A Golden Heart'

Fast bowler and actor S Sreesanth, who has returned to cricket after long hiatus, recently shared a picture with Tamil star Vijay Sethupathi on social media. 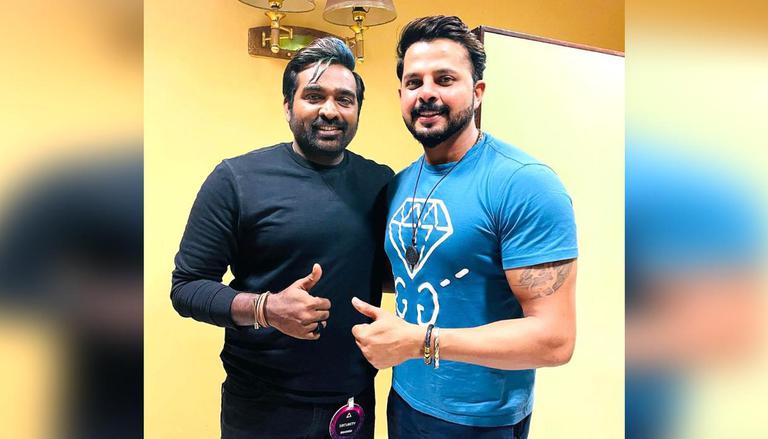 
Fast bowler and actor S Sreesanth, who returned to cricket after long hiatus, recently shared a picture with Tamil star Vijay Sethupathi leaving fans wondering if the two are collaborating for a project.

Taking to Instagram, Sreesanth posted a bunch of pictures of himself with Vijay Sethupathi and captioned it with a heartwarming note. He mentioned that he felt honoured to have gotten the chance to learn from him, describing Sethupathi as 'the man with a golden heart,' he wrote, "@actorvijaysethupathi thanks a lot anna ..it's great honour knowing you and learning every moment with you..lots of love and respect to you... 'the man with a golden heart' "#grateful #love #humbled #movies #tamil #tamilnadu #life #shooting #family #smile[sic]."

S Sreesanth is all geared up to make a comeback in Bollywood with Nirup Gupta's film titled Patta. Directed by R Radhakrishnan, under the banner of NNG Films, the film features him in the lead role as CBI officer. Touted to be a political thriller, Patta will also have other Bollywood stars, the details of which are kept under wraps.

The film has music by Suresh Peters, cinematography by Prakash Kutty, editing by Suresh URS and choreography by Sridhar. The film was expected to go on floors much before the COVID pandemic hit the world. The makers have now postponed its filming until the COVID restrictions are lifted. The actor has previously acted in Malayalam, Kannada and Hindi films. In 2017, he was seen in a Malayalam film Team 5 directed by Suresh Govind.

Meanwhile, Sreesanth's seven years ban from cricket ended in September last year. The fast bowler was banned for allegedly spot-fixing in the IPL. Originally, he was banned for life by the BCCI’s disciplinary committee, but later it was reduced to seven years after his repeated efforts.

Vijay Sethupathi was last seen alongside Taapsee Pannu in a horror-thriller, Annabelle Sethupathi. He will next be seen in Tughlaq Durbar in which he plays a politician’s side-kick. The film will premiere on Sun TV before it begins streaming on Netflix. His forthcoming projects include 19 (1)(a), Maamanithan, Kadaisi Vivasayi, Yaadhum Oore Yaavarum Kelir, Kaathu Vaakula Pendu Kaadhal, and Mugizh.