Burying The Hatchet? Sri Reddy Wishes Rana-Miheeka, Says 'May Your Life Be Peaceful'

In a turn of events, actor Sri Reddy congratulated Rana Daggubati on his engagement. She had earlier accused his younger brother of misconduct.

Sri Reddy took to her social media handle and wrote in her post that she knows Rana Daggubati has seen a lot in his past. She further wrote in the post that she hopes he spends a peaceful life with his girl. Check out the picture below. 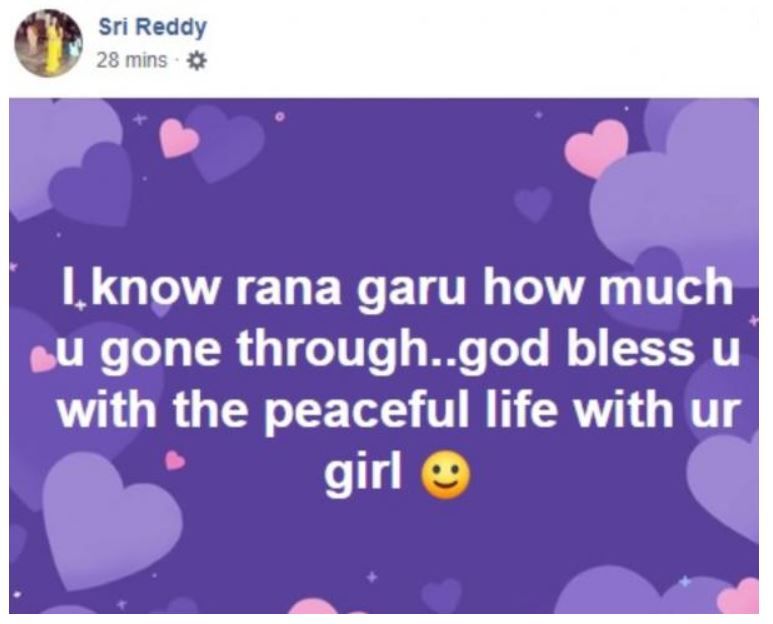 When Sri Reddy had accused Abhiram Daggubati of misconduct

Actor Sri Reddy had accused him of misconduct and had also made a few revelations about an alleged affair that she had with Rana’s younger brother Abhiram. Reddy had leaked intimate photographs with him and claimed that she had spent time with him at his father’s studio. Suresh Daggubati, the father of Abhiram, had refused to comment on it and had said that it was their personal family matter. Suresh Dagguabti had also said that since he is a public figure, his private life also comes into public consumption. Sri Reddy had also accused Nani, Pawan Kalyan, and Shekar Kammula along with Abhiram.

Meanwhile, according to reports from a leading media portal, Rana and Miheeka are said to get married this year. Miheeka Bajaj was born and raised in Hyderabad. She is the co-founder of Dew Drop Design studio which is an interior designing as well as event management company.

On the work front, Rana Dagguabti has many films lined up his way for release. These films include Haathi Mere Saathi and Madai Thiranthu / 1945. Reportedly, Rana was also shooting for Telugu projects that include Hiranya Kashyap and Virata Parvam.

Read | Rana Daggubati To Get Married By The End Of This Year, Reveals Father Suresh Babu

PEOPLE HAVE PLEDGED SO FAR
LATEST NEWS
View all
9 hours ago
Reel life villain to real life hero: Facts about Sonu Sood fans probably didn’t know
3 hours ago
Samantha Akkineni's peace out post & other top posts by regional actors this week
9 hours ago
Vijay Sethupathi's transformation: From humble start to Kollywood superstar
22 hours ago
Jyotika and Suriya's net worth will make your jaws drop & will prove their superstardom
2 hours ago
Director AL Vijay and R Aishwarya blessed with a baby boy on Saturday