As actor Jyothika makes her Instagram debut today, August 31, husband Suriya had the most adorable reaction to her photos, calling his wife "the strongest." 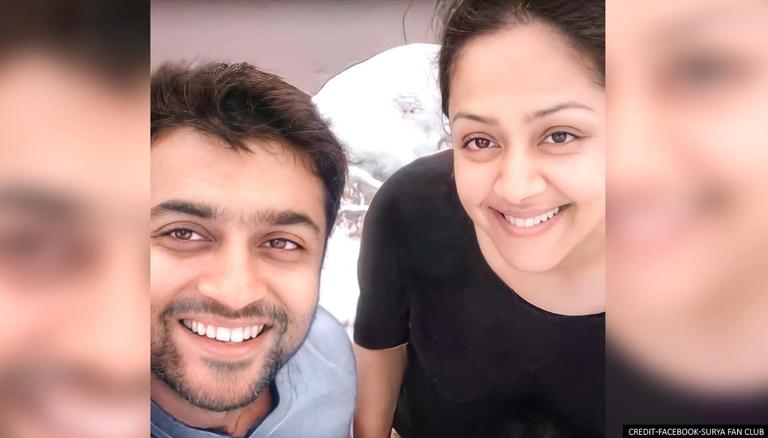 
South Indian star couple Suriya Sivakumar and Jyothika have often mesmerised fans with their beautiful bond, who hail them as couple goals. Now, Jyothika has recently made her Instagram debut and nobody seemed more excited than Suriya. The actor uploaded her first Instagram post today, August 31, from her time in the Himalayas and can be seen waving the Indian national flag. She uploaded a string of photos from her time in the hills during Independence day, to which the Kaakha Kaakha actor took to the comments section, calling his wife "strongest."

Jyothika mentioned that she has downloaded the photo-sharing app to spread "A lot of positivity" and share instances from her lockdown diaries. She uploaded four pictures in her post and described the location of each. "At the Himalayas on Independence Day, The beautiful Kashmir Great Lakes , 70 km trek With the awesome team of Bikat adventures- Rahul ,Sachin, Raul and Ashwin , n the Kashmir team Mushtaq n Riyaz bhai," she wrote. She concluded by stating "India is gorgeous! Jai hind!" Have a look.

Her debut on Instagram received outpouring love from fans, who lovingly welcomed her to the social media platform. Among them, was her husband Suriya, who commented, "My pondatti Strongest!!!" (My Wife Strongest). He also wrote, ''Thrilled to see you on Insta.” The actor has already garnered more than one million followers since her debut on Tuesday, August 31.

More about the star couple

Suriya and Jyothika tied the knot in 2006, and have been going strong since. The duo are parents to two children, namely; daughter Diya (born 10 August 2007) and son Dev (born 7 June 2010). The celebrity couple has starred in seven films together - Poovellam Kettuppar, Uyirile Kalanthathu, Kaakha Kaakha, Perazhagan, Maayavi, June R and Sillunu Oru Kaadhal.

On the work front, the Udanpirappe actor was last seen in 2020s Ponmagal Vandhal and has starred in several Telugu, Hindi and Tamil films. On the other hand, Suriya will be next seen in Jai Bhim, which is slated for a Diwali release on Amazon Prime Video. The 46-year-old's other upcoming film with Vetrimaaran is titled Vaadivasal, which is based on a popular Tamil novel of the same name. It is a story based on a bull and the one who captures it. He was also seen in Gautham Menon's segment of Netflix’s Tamil anthology, Navarasa, that released on Netflix earlier this month.