Suriya-starrer 'Jai Bhim' Opts For OTT Release; To Start Streaming From THIS Date

Suriya's much-anticipated ‘Jai Bhim’ is all set for its release. The actor headed to social media to share the poster of the film and revealed its release date. 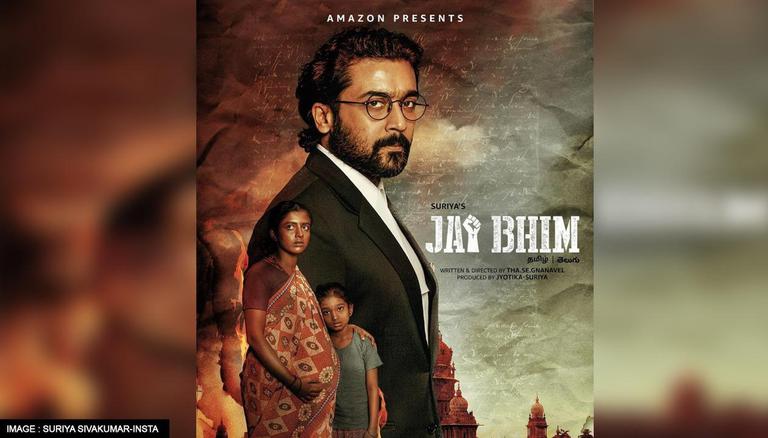 
Suriya's much-anticipated film, Jai Bhim is all set for its release. The actor and the production company behind the film, 2D Entertainment too took to Twitter to make the exciting announcement to the fans and followers who have been waiting eagerly for the release of the film. Apart from Suriya, the film will also see actors including Prakash Raj, Rao Ramesh, Rajisha Vijayan and Lijo Mol Jose take on pivotal roles as the film releases this festive season.

The upcoming film will release on November 2 on the online streaming platform, Amazon Prime Video. Announcing the news to his fans and followers, Suriya uploaded a poster of his film on Twitter, which contained the release date of the film. He mentioned that he was 'proud' to bring the audience a 'story of courage and faith in pursuit of Justice.'

The Tamil film will see Suriya's character take on numerous battles and fight for the rights and justice of the tribal communities. After the actor's work in Soorarai Pottru, his upcoming film is also expected to be a phenomenal one and fans and extremely excited for its release. The film will follow a tribal couple, Senggeni and Rajakannu, whose life is turned upside down after Rajakannu is arrested and disappears into thin air. This is when Suriya comes into the picture as he plays the role of Chandru, a lawyer who is hired by Senggeni in despair.

Suriya's latest production, Raman Aandalum Ravanan Aandalum (RARA) recently released on Amazon Prime Video. He took to Instagram to pen down a beautiful note and shared a picture of himself watching the film. In the caption of the post, he mentioned that he truly enjoyed making the film. He wrote, "We loved making it hope you'll like it too![sic]." The film was directed by Arisil Moorthy and saw Vani Bhojan, Mithun Manickam, Ramya Pandian, and Vadivel Murugan take on pivotal roles on screen. The story revolves around the life of a 35-year-old farmer, Kunnimuthu and his wife Veerayi, who lose their two bulls. The streaming platform described the film as a social satire themed around a village and its oddities.