Suriya's upcoming project with Pandiraj called Suriya 40 commences its shooting. Fans are excited about the film. Read ahead to know more

Actor Suriya's upcoming film Suriya 40 with director Pandiraj was launched today in Chennai. Sun Pictures took to Twitter to announce the commencement of shooting for Suriya 40. The film feature Sathyaraj and Priyanka Arul Mohan in the main lead.

Also Read | Zendaya Posts Pics From 'Malcolm And Marie' Set, Jokes About Watching It On V-Day

Sun Pictures announces the commencement of the Suriya 40 shooting

In the photos, one can see the film's launch started with a customary prayer to God in the presence of the cast and crew. The makers decided to launch the film with a minimal crowd and also ensured that the team follows necessary safety precautions. Sathyaraj and Priyanka Arul Mohan were also spotted at the sets of the film, Suriya will join the shooting later. Check out the tweet below:

Also Read | Did You Know Suriya Was Mentored By Late Actor Raghuvaran In His Early Days?

Fans were very excited about the collaboration between Suriya and Pandiraj. many fans loved this news of movie commencement and started trending Suriuya 40 on Twitter while many others are already asking for the release date of the film. Several others asked for the update of Thalapathy 65. Check out some reactions from fans and followers on Twitter: 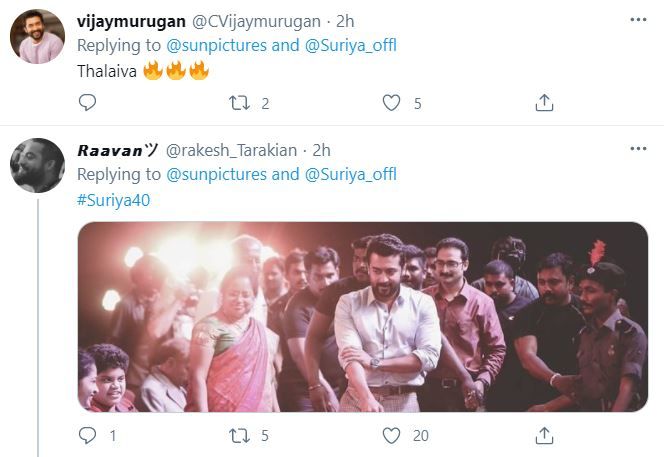 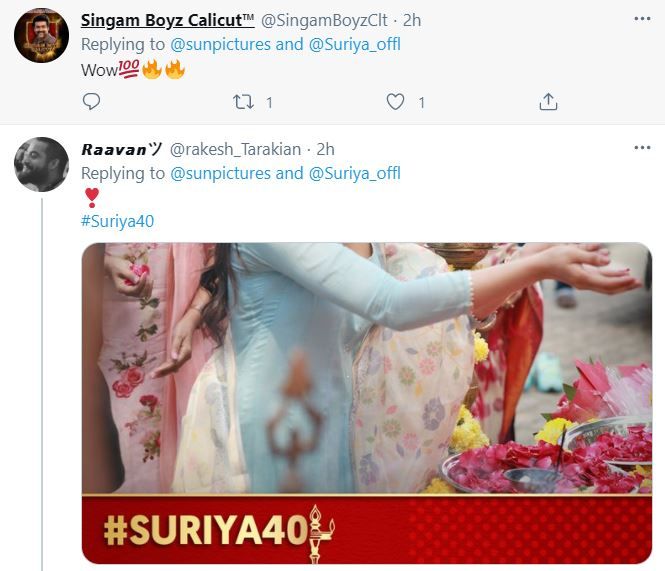 Suriya's movies have always entertained fans with their action sequences and compelling plot. Suriya made his debut in Nerukku Ner in 1997, Suriya got his breakthrough role in Nandha which released in 2001. He got his first major commercial success with the thriller, Kaakha Kaakha in 2003. His performances in films like Pithamagan and Perazhagan were award-winning films. He then played a man suffering from anterograde amnesia, in the 2005 blockbuster Ghajini. He got major stardom by playing the dual roles of a father and son in Gautham Menon's semi-autobiographical Vaaranam Aayiram in 2008. He did an aggressive cop role in the Singam trilogy which was even reprised in Bollywood with Ajay Devgan in the lead.

Also Read |  Remember When Suriya Made His Singing Debut With A Commercial? Here's More

Pandiraj is a popular Tamil film director who has written award-winning films like Pasanga in 2009 which even won a National Award. He also directed several other popular films like Vamsam, Marina, and Idhu Namma Alu. He even won a SIIMA award for Best Director for his film Kadaikutty Singam in 2018.

Also Read | Evanna Lynch, 'Harry Potter’s' Luna Lovegood Is Coming Out With A Memoir On September 14