Vijay paid a courtesy call on Telangana Chief Minister K Chandrasekhar Rao on Wednesday as the actor is shooting for his upcoming film in Hyderabad. 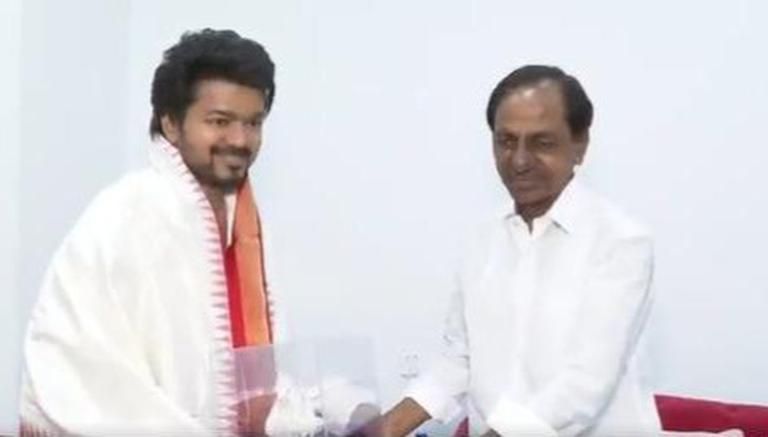 
Actor Vijay is currently busy shooting for his forthcoming highly-anticipated project, tentatively titled Thalapathy 66http://www.republicworld.com/entertainment-news/regional-indian-cinema/thalapathy-66-vijay-begins-shooting-with-rashmika-mandanna-see-muhurat-ceremony-pics-articleshow.html. The Beast actor paid a courtesy call on Telangana Chief Minister K Chandrasekhar Rao on Wednesday as he is shooting for his upcoming film in Hyderabad. Bankrolled by Dil Raju and Shirish under the banner of Sri Venkateswara Creations, the film also stars Rashmika Mandanna in the lead role.

Taking to his official Twitter account, film industry tracker Ramesh Bala took to his Twitter handle and shared a short video that sees the Telangana CM greeting Vijay with a shawl and a gift. Vijay met the CM along with film's director Vamsi Paidipally and it is said to be a courtesy call. The post had a caption, "#Thalapathy @actorvijay met Telangana CM Hon #KCR garu @TelanganaCMO". Watch the video here:

Recently, the production company of the film welcomed actors Yogi Babu, Srikanth, Shaam and Sangeetha on board, who will be seen playing pivotal roles alongside Vijay and Rashmika Mandanna. Fans eagerly await to see them share screen space with the leading duo, who recently began shooting for the movie. Srikanth is known for his stellar role in Mirugaa, while Shaam was most recently seen in the thriller Kaaviyyan.

Rashmika Mandanna was roped in for Vijay's next on the occasion of her birthday on April 5. Making it official, the production house tweeted, "Wishing the talented and gorgeous @iamRashmika a very Happy Birthday ! Welcome onboard #Thalapathy66 @actorvijay @directorvamshi #RashmikaJoinsThalapathy66". This will be Rashmika's first movie with Vijay and Sri Venkateswara Creations.

Wishing the talented and gorgeous @iamRashmika a very Happy Birthday !

Vijay on the work front

On the professional front, Vijay was recently seen in Beast alongside Pooja Hegde. The film hit the silver screen on April 13 and managed to do well at the Box Office. The film saw Vijay in the role of a military officer Veera Raghavan, who faces a task in a mall when it is hijacked by terrorists. This is when he decides to take control of the situation and face the villains to protect the civilians.