TKSS: SS Rajamouli Reveals His Driver Got Angry As He Made Film On A 'Makkhi'

During his appearance on TKSS, Jr NTR revealed astonishing fact related to SS Rajamouli's film, 'Makkhi'. The actor revealed that he would keep flies in fridge 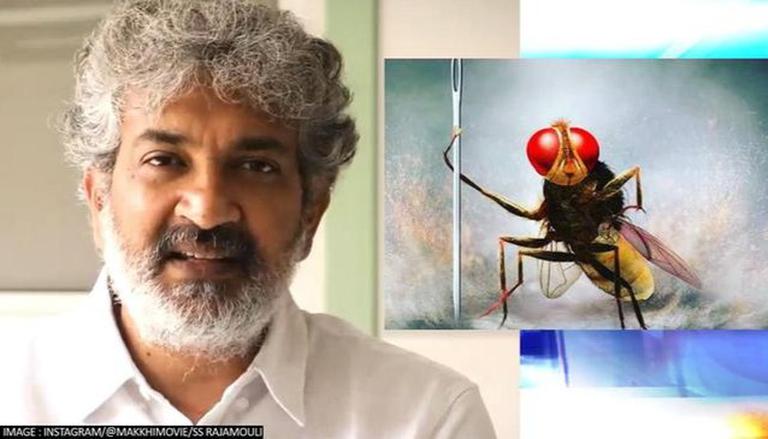 
Before SS Rajamouli rose to fame across India with Baahubali, he has released numerous stunning films that are also dubbed in Hindi. One such film is Makkhi starring Kichcha Sudeepa and Samantha Ruth Prabhu, which is a Hindi version of his 2012's release Telugu drama, Eega. During his recent appearance on Sony Television's The Kapil Sharma Show, Jr NTR revealed an astonishing fact related to the film. He shared that the filmmaker would keep flies in his fridge to study them.

SS Rajamouli kept flies in his fridge while making 'Makkhi'

Rajamouli had accompanied the cast of his forthcoming historical drama, RRR- Jr NTR, Ram Charan and Alia Bhatt on TKSS. During the episode, Jr NTR shared that at one time, Rajamouli kept flies in his fridge. He joked, "When you opened the fridge, there were more flies than food." A bemused host Kapil asked for the reason behind it and Ram Charan explained, "He was hibernating them so that he could study them properly. This was when he was making Makkhi." Rajamouli smiled and nodded in agreement.

Flies go into hibernation, a kind of deep sleep, in cold temperatures. The filmmaker apparently used the state to study them to make sure his depiction of the fly in the film was anatomically correct. Listening to this, Kapil said, "Aap sab ko band kar dete ho (You lock everyone up). When you made 'Makkhi', you locked the flies up in the fridge. When you made Baahubali, you locked up Prabhas in Film City for five years."

READ | Ram Charan & Jr NTR’s 'RRR' to be postponed amid Omicron scare? This is what we know

After this, Rajamouli also shared that his driver thought he was 'mad' to make a film on flies. He revealed, "My car driver got very angry that I am making a movie on a fly. He said, ‘Have you gone mad? Forget these flies and cockroaches, why can’t you make films with human beings?"

Makkhi also featured Nani and was released in several languages such as Tamil and Telugu as well. The south versions of the film were a commercial success, however, the Hindi version failed at the box office. Despite this, the film earned over Rs 100 crore globally.

READ | Ram Charan confirms his next project, to reunite with 'Rangasthalam' director Sukumar

RRR stars Ram Charan and Jr NTR as freedom fighters- Alluri Sitarama Raju and Komaram Bheem. The film is a period drama that charts the story of Raju and Bheem in the 1920s, who braved the British together in the pre-independence era. The fictional retelling narrates how a British governor captured a girl and Komaram Bheem becomes her protector. Alluri Sitaram Raju is then deployed to catch hold of him but he rather joins hands with Bheem and fights against the British. The film is scheduled to release on January 7, 2022. The film also stars Ajay Devgn and Alia Bhatt in pivotal roles.

WE RECOMMEND
Watch 'RRR' stars Ram Charan, Jr NTR play read my lips on TKSS & leave Rajamouli in splits
Ram Charan, Jr NTR shake a leg to RRR's 'Naatu Naatu' on The Kapil Sharma Show'; Watch
Shahid shares an incident of Misha on TKSS; says 'It's his best feeling of being a dad'
Jr NTR pays emotional tribute to late power star Puneeth Rajkumar through a song; Watch
Jr NTR and Ram Charan gear up for 'RRR' pre-release event in Mumbai; Take a look
Listen to the latest songs, only on JioSaavn.com