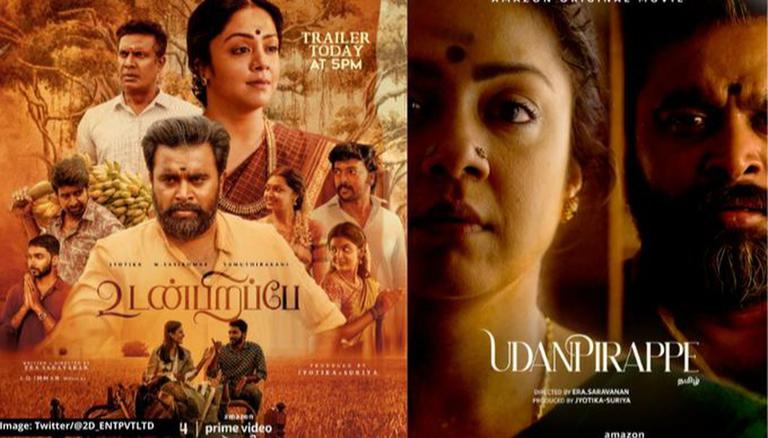 
Touted to be one of the most talented actors in the South film industry, Jyothika is all set to deliver a soulful performance in the upcoming family drama Udanpirappe. Adding to the excitement of the fans, the movie will mark the 50th film of her career. The makers have already dropped the Udanpirappe trailer and the comments appreciating the brief look into the film have already started rolling in.

Amazon Prime Video dropped the trailer of the upcoming Tamil film on Monday, October 4. The trailer of the movie opens up to a village gathering for a festival introducing the character of Jyothika, who is a middle-aged woman greeting the villagers. Further, the trailer shows the cold war brewing between Jyothika's brother and her husband owing to the differences in their ideology to punish the wrongdoers in their village.

READ | Where to watch 'Vasundhara', the Telugu dubbed version of Jyothika's 'Kaatrin Mozhi'?

More on Jyothika in Udanpirappe

During the trailer launch of the film, the actor opened up about treating her fans with the 50th movie of her career. She also stated that she could not have asked for a better role for her milestone film. The 42-year-old stated, ''I was able to perform the biggest strength of women in this film. That’s silence. Because about 90% of women are living in silence. But, they are strong. They are silent but strong. It is the most beautiful character I have played in my career.''

Talking about the premise of the movie, she said, ''Family and relationships have always been the core of my being. When I have narrated the story, I knew I wanted to be a part of this emotionally satisfying family drama. It has been a delightful experience working with a talented ensemble cast and putting together this labour of love and passion.''

Along with Jyothika, the movie features M. Sasikumar, Samuthirakani, Soori, Kalaiyarasan, and Nivedhithaa in pivotal roles. The movie is bankrolled by Suriya's 2D Entertainment. It is scheduled to be released on October 14 on Amazon Prime Video.