The first glimpse of Ajith Kumar's Tamil film, ‘Valimai’ was finally released on Thursday after much excitement and promised fans an action-packed ride. 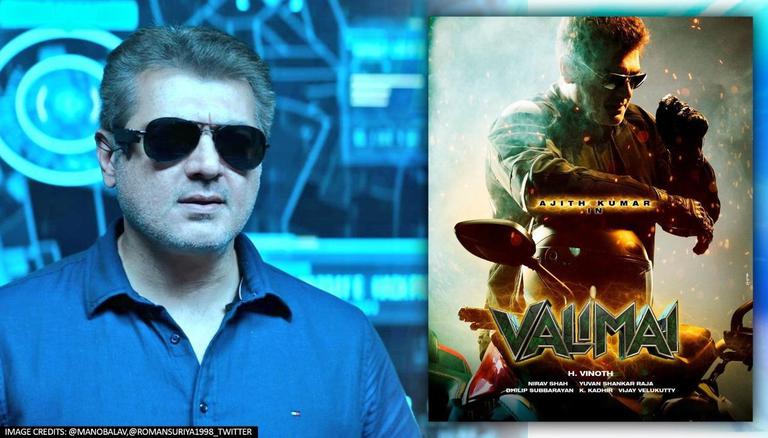 
The first glimpse of  Ajith Kumar's much-awaited Tamil film, Valimai finally released on Thursday after much excitement. Fans have been waiting eagerly for Thala Ajith's first look, and have been enjoying the updates the team behind the film is constantly sharing via social media. The film wrapped up production earlier this month with a short schedule in Russia.

After being in the production phase for two years, the first look of Valimai is finally here. Producer Boney Kapoor took to social media to make a big announcement about the upcoming film. Through his post on Twitter, he revealed that the film would be making its theatrical release on Pongal next year, that is in 2022. The makers of Valimai gave fans and followers the first glimpse into the film by way of a video. Boney Kapoor wrote, "Get ready for the #ValimaiPongal! Here's presenting the #ValimaiGlimpse featuring #AjithKumar."

Get ready for the #ValimaiPongal! 🔥

The video gave fans a sneak-peek into the film ahead of its release. It featured some risky stunts and some thrilling bike chases. It also features a scene of a bike crashing through a window and will for sure generate excitement among fans on the upcoming release.

Watch the glimpses of Valimai here

Valimai is currently in the post-production stage and will hit the big screen next year. The film will mark Ajith's second collaboration with Boney Kapoor and director H Vinoth after the 2019 project, Nerkonda Paarvai. The film saw Shraddha Srinath, Abhirami Venkatachalam, Vidya Balan, Arjun Chidambaram and others take on roles alongside Ajith Kumar. The film was a legal drama, while the trio's upcoming Valimai is touted to be a cop drama. Ajith will reportedly take on the role of a police officer, while Huma Qureshi, Kartikeya Gummakonda, Yogi Babu and others will also be seen in pivotal roles.

The film is expected to be full of action-packed sequences and stunts. Thala Ajith is famous for being a race driver for a brief period of time and has participated in circuits in Delhi, Mumbai and Chennai. The actor is among the few Indians to have raced in Formula championships in the International arena. He participated in the 2003 Formula Asia BMW Championships as well as the 2010 Formula 2 Championship.

WE RECOMMEND
Valimai Glimpse to release today; Netizens speculate release time
'Valimai': Thala Ajith Kumar starrer release date announced, teaser to be out this week
Ajith's 'Valimai' team gifts Kartikeya Gummakonda with special poster on his 29th birthday
Thala Ajith's action thriller 'Valimai' teaser to be out next week: Reports
Navdeep reunites with Thala Ajith after 12 years at an event, says 'This man is pure love'
Listen to the latest songs, only on JioSaavn.com