Fueling the excitement of the fans, the makers of the Ajith Kumar starrer highly anticipated film Valimai have released a BTS video. Watch here. 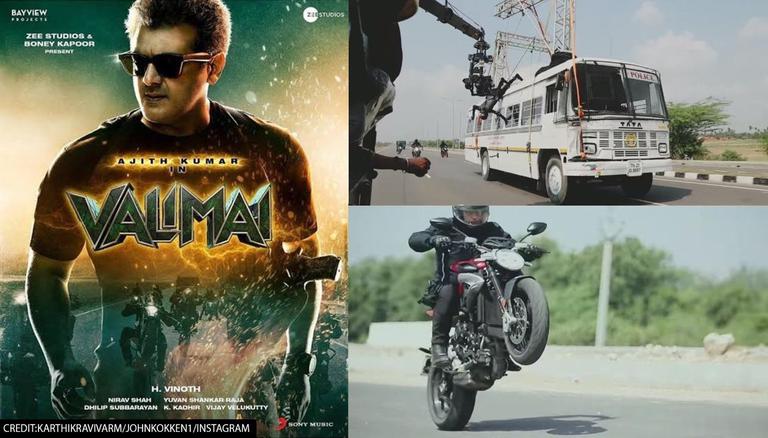 
South superstar Ajith Kumar is all set to bring an action-packed visual treat to his fans in cinemas next year with Valimai. Tamil-language action thriller film directed by H. Vinoth also features Bollywood actor Huma Qureshi and young star Kartikeya Gummakonda. Fueling the excitement of the fans, the makers recently dropped a video showing the making process of the movie giving a glimpse into the thrilling action that awaits the fans.

Taking to their official social media handles, the makers announced the release of 3 minutes and 3 seconds long video giving a glimpse into the hard work and relentless efforts of the team and cast into making the film despite facing several setbacks. The video was shared with the caption, ''And the wait ends right here! Headphones and enjoy the mass-filled''. The clip showed the high octane stunts involving actor Ajith Kumar as well Kartikeya Gummakonda vigorous workout session to get into the shape to play his character.

Get ready with Ur Earphones

Additionally, the makers talked about the setbacks they faced due to COVID-19 during filming and commended the determination of the cast actor Ajith Kumar to complete the film. They wrote, ''When everything was alright, COVID-19 made our days tougher. We stood alongside everyone hoping for the light. Hoping to live, hoping to love, hoping to do what we love. Despite hard times, people kept showering their love. It gave us more strength, hope, confidence. We were hoping to start shooting again.
Thank you Ajith sir for your support, hard work and commitment.'' Watch the video here.

Netizens' reaction to the video

Soon after the making video was released, Valimai landed itself on the trending topics list on Twitter. Several shared the video and expressed their anticipation to catch the movie in the theatre. Actor Kartikeya also shared the video with the caption, ''We may stumble and fall But shall rise again; It should be enough if We did not run away from the battle” These lines describe #Ajith sir and the spirit he filled in us. Can still feel the goosebumps looking back at the journey of #Valimai in the video''

“We may stumble and fall
But shall rise again ;
It should be enough if
We did not run away from the battle”
These lines describe #Ajith sir and the spirit he filled in us.
Can still feel the goosebumps looking back at the journey of #Valimai in the videohttps://t.co/Sw2csUNFfA

Backed by Boney Kapoor, the cop drama is all set to hit the theatres on the occasion of Pongal next year. Announcing the release date, the makers wrote, ''Happy to announce that #Valimai will hit the screens on Pongal 2022. #ValimaiFromPongal #ValimaiPongal #Valimai (sic).”

WE RECOMMEND
Why was Ajith Kumar conferred the title 'Thala' and what does it mean?
'Valimai': Thala Ajith Kumar starrer release date announced, teaser to be out this week
Valimai Glimpse to release today; Netizens speculate release time
'Valimai' cast: Know about the actors in the upcoming Tamil film by filmmaker H Vinoth
'Valimai': Ajith Kumar starrer's second single 'Mother' is an ode to motherhood
Listen to the latest songs, only on JioSaavn.com