The team behind the upcoming film ‘Tughlaq Durbar’ unveiled an all-new music album from the film starring Vijay Sethupathi. The film will also star Parthiban. 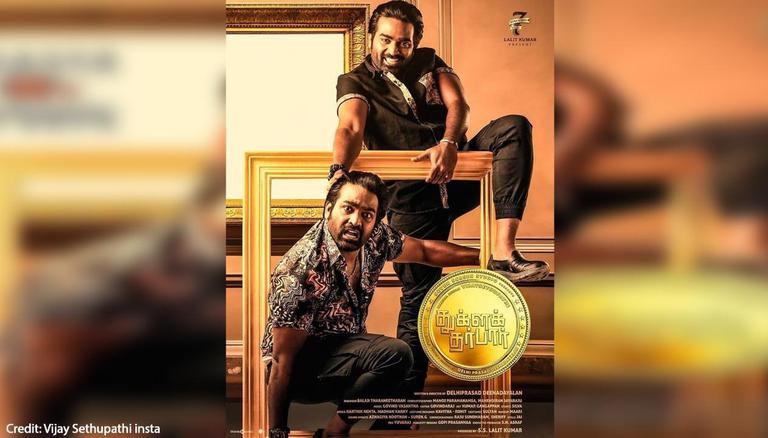 
The makers of the upcoming Tamil film Tughlaq Durbar unveiled the music album of the film on Wednesday. This comes after the team released the first-look for the poster of the film. The upcoming political drama will star Vijay Sethupathi, Parthiban and Raashi Khanna in lead roles.

The music album consists of four songs, namely Arasiyal Kedi, Dravida Kone, Kaami Kaami and Annathe Sethi. The music for each of them is composed by Govind Vasantha. Promoting Kaami Kaami, Vijay Sethupathi took to his Instagram account on Wednesday to announce to his audience that the song had been released.

Have a look here:

Vijay Sethupathi was last seen in Netflix’s Navarasa. The actor is now all set to take on his role in the upcoming film, Tughlaq Durbar. Of the songs released as part of the music album, Kaami Kaami is a romantic number.

Tughlaq Durbar is helmed by Delhi Prasad Deenadayalan, and will also see Vijay Sethupathi and Parthiban collaborate with each other once again after their stellar performance in Naanum Rowdy Dhaan. Manjima Mohan, Karunakaran and Bagavathi Perumal will also take on pivotal roles in the film. Lalit Kumar will produce Tughlaq Durbar under the banner of Seven Screen Studio. Manoj Paramahamsa and Mahendran Jayaraj will be handling the cinematography of the film.

Vijay Sethupathi will also take on a role in Lokesh Kanagaraj’s upcoming film, Vikram. The film recently released its first look featuring mugshots of the lead actors. The film will star Kamal Haasan in the lead role and will also feature Vijay Sethupathi and Fahadh Faasil. The poster portrayed the characters as veterans who are no strangers to violence and bloodshed.

Vijay Sethupathi was seen in the Netflix drama, Super Deluxe. He bagged two awards for his role in film for best actor and best supporting actor. He also starred in the Tamil action thriller Master alongside  Malavika Mohanan, Arjun Das, Andrea Jeremiah and Shanthanu Bhagyaraj. Vijay Sethupathi also took on the lead role in the 2016 film Sethupathi. He starred opposite Remya Nambeesan in the action thriller. The film was helmed by S. U. Arun Kumar.