Vishnu Manchu took to his Twitter to share a series of photos with souths superstars Rajnikanth and Mohan Babu. Scroll down to see the pictures and know more 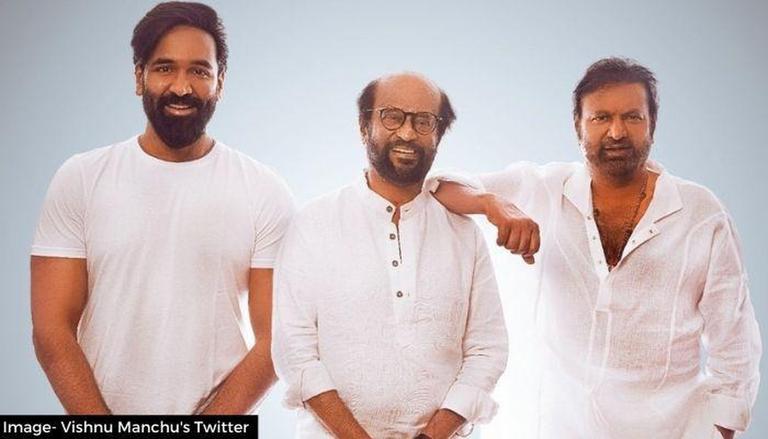 
On May 21, South Indian actor Vishnu Manchu took to his Twitter to treat his fans with a series of pictures with superstar Rajnikanth and his father Mohan Babu. He has called these veteran actors the 'OG gangsters'. The three of them are stylishly posing for the camera.

Vishnu Manchu with the 'OG gangsters'

In the pictures, Vishnu Manchu is wearing a white teeshirt and a pair of black jeans whereas Rajnikanth and Mohan Babu are donning white kurtas. The trio is smiling for the camera. In the caption of the post, it was written, "The OGs. Original Gangsters! @rajinikanth @themohanbabu and then goofy Vishnu Manchu".

As soon as the tweet was shared, netizens rushed in to comment on it. Many have showered love on Rajnikanth calling him the 'Thalaiva' while another has called them 'true inspirations'. One of them also suggested that a movie should be made where Rajnikanth plays the hero and Mohan Babu the villain and it would make a thrilling plot. See their reactions and tweets below.

One and only rajini sir 💝

Annaatthe is one of the highly anticipated movies of Rajnikanth. The film was set to release this year but due to the rise in COVID-19 cases, the release was pushed ahead. In what comes as the latest development about the film, Tamil actor George Maryan, who plays a pivotal role in the movie has finished shooting his parts. He took to Twitter to share a picture with the Enthiran actor. In the caption, he wrote, "I finished my parts for the film. Thanks to Rajini Aiya and Director Siva Sir". He also mentioned that the film has come off well so far.

This action drama film is helmed by Siva who has previously directed Viswasam and Daruvu. The movie is produced under the Sun Pictures banner. The ensemble cast of this film includes some of the prominent actors of the south Indian film industry. The cast includes Meena, Khushbu, Nayanthara, Keerthy Suresh, Jagapathi Babu, Prakash Raj and Vela Ramamoorthy. Bollywood actor Jackie Shroff has also been roped in to play a pivotal role as well. D Imman has composed the music for this film. The cinematography department is being handled by Vetri and Ruben. The new release date of the film has not been announced yet.