Karan Kundrra in a live chat session addressed break up rumours with Anusha Dandekar that had surfaced the internet recently. Read on to know details.

Rumours about Karan Kundrra and Anusha Dandekar sparked when the two were seen refraining from posting pictures with each other from the past few months. The couple had never shied away from posting pictures together, hence people started speculating if the couple had drifted apart. After a long period of silence on the issue, the two addressed the rumours and finally broke their silence on it. The couple has neither admitted to nor dismissed the rumours.

Amid the lockdown, Karan Kundrra was in a live chat session with a media portal on social media where he was asked about the break-up rumours. He was seen laughing off the rumours and said that yes they have broken up. Adding further to his comments, the actor said that people nowadays are so free that they will assume anything. Karan Kundrra further asserted and said that whatever the truth is, it will come out in a couple of days.

Recently, Anusha Dandekar broke her silence on rumours about her break up with Karan that had surfaced the internet. The two started dating 6 years ago and have hosted reality shows together. Anusha shared a long note on her Instagram stories and slammed the media reports but neither confirmed the news nor did she deny it.

She further mentioned in the note that she knows who among her circle went to the press with that news. Slamming the person, without taking their name, she said that it’s devastating to know even when the world is going through the crisis, someone wanted to make a spectacle of someone’s life. 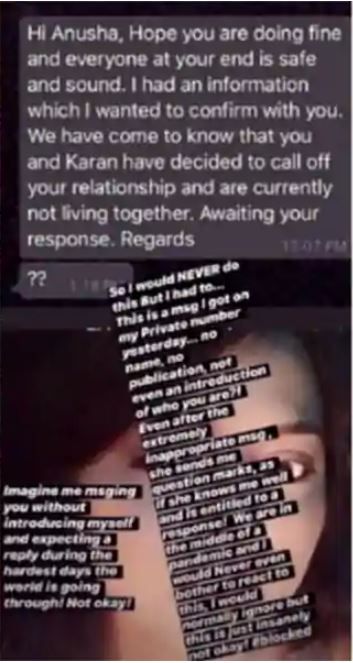 PEOPLE HAVE PLEDGED SO FAR
LATEST NEWS
View all
14 hours ago
Krushna abhishek's best moments from 'the kapil sharma show'; see here
15 hours ago
Dilip joshi has been part of these shows apart from 'tmkoc'; see list here
18 hours ago
Mandana karimi of 'bigg boss' fame confirms that she does not have coronavirus
14 hours ago
Is 'taarak mehta ka ooltah chashma' actor dilip joshi a strict father in real life?
15 hours ago
Surbhi chandna shares recipe for the special goan dessert serradura on eid