Soon after introducing their baby boy to the world in an ‘explosive’ video, Anita Hassanandani’s toddler has now received goodies from cricketer Irfan Pathan.

Soon after introducing their baby boy to the world in an ‘explosive’ video, Anita Hassanandani’s toddler has now received goodies from former Indian cricketer Irfan Pathan. On Tuesday, February 23, the actor, took to Instagram, to share a picture thanking the cricketer for sending an adorable gift for their little munchkin. Here’s taking a quick glimpse at Anita Hassanandani’s Instagram story. 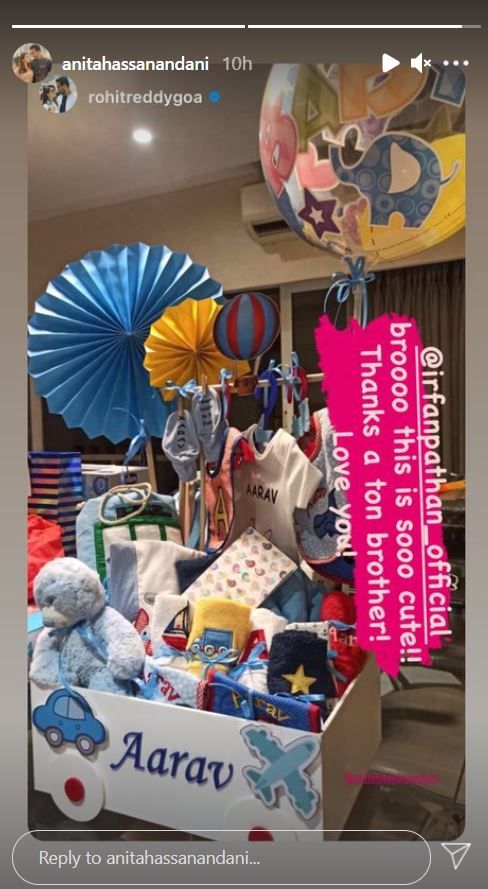 In the picture shared, fans can see how Irfan specially customised the goodie pack under Anita’s baby’s name Aarav. Along with clothes, the care pack includes toys, balloons, cards, pillow and a whole lot of vivid things. As soon as the gift arrived, both Anita and her husband Rohit Reddy were left surprised. The celebrity couple went to thank the cricketer for his sweet gesture and the ‘cute’ gift package.

This comes just after the duo unveiled the face of baby Aarav with their Instagram family. Anita and Rohit are known for their quirky social media posts and following the same, the couple opted for an interesting way to introduce their baby boy. The clip sees Anita standing with a bomb painted on her baby bomb.

Beside her, husband Reddy appears to light up the bomb. After an explosion, the video sees the couple holding and embracing their baby. It was while sharing the video that the actor also unveiled their munchkin’s name. Check out the post shared by the actor below:

The elite couple embraced parenthood on February 9 and they have stayed quite active on social media by sharing all the updates online with fans. In a previous video, which appears to be taken right after Anita gave birth, fans witnessed the very first reaction of them watching and holding their toddler. While Anita is rested on the hospital bed, on the other hand, Rohit kneels down. At the time, the face of the baby was well-hidden by the duo. The clip captivated the rush of emotions which the duo experienced, after watching their baby. Here’s taking a quick look at the post shared by Rohit Reddy: