Rupali Ganguly took to Instagram to pen a heartfelt note as Mithun Chakraborty visited her on the sets of 'Anupamaa'. The actor says she was elated to meet him. 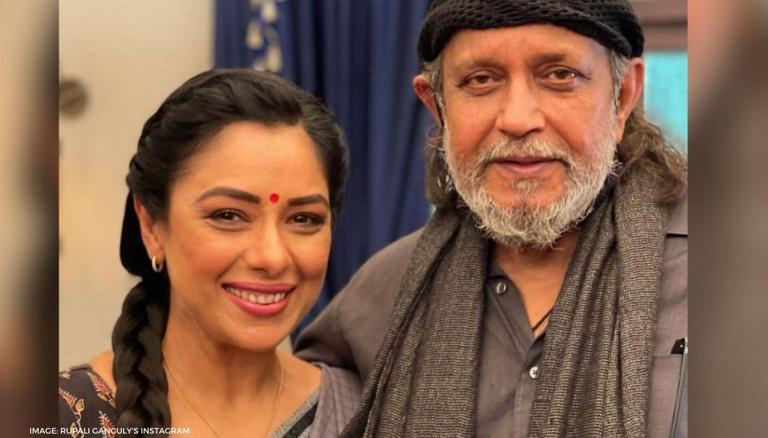 
Anupamaa actor Rupali Ganguly seemed to have a good time on Sunday as actor Mithun Chakraborty visited the sets. The veteran actor turned politician visited the sets to surprise his daughter-in-law Madalsa Sharma. While visiting, the actor spent time with the cast of the show and Rupali Ganguly took to her social media to thank him for the visit.

The cast of Anupamaa was surprised as Mithun Chakraborty paid them a visit on the sets of the show. Having surprised his daughter-in-law Madalsa Sharma, the veteran actor stopped and clicked pictures with other cast members causing Rupali Ganguly to reminisce her past memories of him. The actor penned a heartfelt note starting with “When Happy memories come visiting.”

Sharing pictures of herself with the veteran actor, Rupali wrote, "The first time I ever faced the camera was with him when I was 4 yrs old My first Hindi film as a heroine was with him … (set par Pappa aur inse bohot daant padti thi!) He is the person who always admonished me for not taking myself seriously as an actor Elated and Overwhelmed beyond measure when he said he is proud of me and that my performance moved him to tears ….. aur kya chahiye …. Aise laga jaise mehnat safal ho gayi The original Rockstar - My father’s favorite …. @mithunchakrabortyofficial thank u for blessing our set with ur presence." Rupali Ganguly's photos caught large attention as the actor's fans rushed to the comment section to shower love for the post.

READ | "I have an Angel, I call him Pappa": Rupali Ganguly remembers late father

Rupali plays the role of Anupamaa Shah in the hit TV serial. The series which also stars Sudhanshu Pandey and Madalsa Sharma in prominent roles is a fan favourite. The show which airs on Star Plus, and Utsav Plus revolves around the life of a Gujarati homemaker Anupamaa Vanraj Shah and her family. A devoted housewife, mother, and daughter-in-law, her self-realization comes late and thus she sets out to live life on her own terms.

READ | Rupali Ganguly shares a fan edit of Monisha Sarabhai, says 'Monisha was me and I am her'

Mithun Chakraborty on the work front

Mithun Chakraborty has been a part of over 356 movies in his career so far, with 253 lead roles. He was last seen in the Ram Gopal Varma-directed horror thriller movie 12 ‘o'Clock. The film which released in theatres on January 8, 2021, saw the Gunda actor share screen space with Flora Saini, Manav Kaul, Krishna Gautam and Makarand Deshpande. He was also seen in the 2019 thriller, The Tashkent Files written and directed by Vivek Agnihotri. Mithun Chakraborty served as a member of the Rajya Sabha, from 2014 to 2016.