Archana Puran Singh once again took to her Instagram profile to share a hilarious video and the clip is making netizens burst out in laughter. Watch it here.


On March 11, TV host and actor Archana Puran Singh, once again took to her Instagram profile to share yet another hilarious video of herself. The star has currently jetted off to America to spend a small holiday with her family. Now, while holidaying, Archana went on a shopping spree and discovered a hilarious difference between the American and Indian culture.

In the clip, the actor can be seen walking on the streets of America, when she finds a slew of street shops selling DIY clothes with abstract patterns and colours splattered on them. The Kapil Sharma Show star hilariously compared the attires with the ‘Holi’ clothes of Indian people. She quickly quipped, how Indians throw away their Holi clothes as they deem colour-stained clothes are unfit to wear.

However, in America, she found that it’s a popular culture to wear colour-stained ensemble, as she points the DIY creativity of the street shops. Archana laughs in the video and says “just sayin” while sharing her opinion online with her Instagram family. Here’s taking a quick look at the video shared by Archana Puran Singh:

READ | Archana Puran Singh kept her marriage with Parmeet Sethi secret for 4 years, did you know?

As soon as the video surfaced on the photo-sharing application, it garnered a lot of attention from netizens. Fans quickly rushed to compliment the hilarious nature of the actor. While some said, “OMG you're absolutely funny”, many flooded the post with laughing emoticons. The post has racked up thousands of likes from her Instagram family. Here’s taking a quick look at how fans have reacted to her latest video: 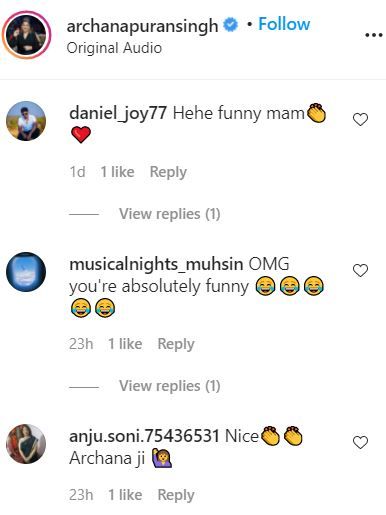 In another post, Archana was seen posing in the busy streets of Manhattan. She can be seen donning a long striped jacket to protect herself from the chilly weather of the country. Holding her mobile phone and covering her face with a mask, she looks away from the camera as she strikes a pose. It seems to be just another normal post until netizens read her caption. Viewers have often seen Kapil Sharma cracking jokes about Archana living in Madh. Now, while sharing the post, the actor used the same element in a funny manner. Check out the post shared below:

READ | Archana Puran Singh gets vaccinated against COVID-19, wonders where she can travel now