Archana Puran Singh Thanks Her Fans After Achieving A Milestone; Gets Emotional

Veteran actor and judge of 'The Kapil Sharma Show' Archana Puran Singh gets emotional while thanking her fans after achieving a milestone; Have a look

Archana Puran Singh had last year replaced Navjot Singh Sidhu as the judge of The Kapil Sharma Show after the latter got in the middle of a social media storm. She has effectively filled the absence of Sidhu as the judge and often has friendly banters with the show’s host Kapil Sharma who takes every opportunity to ‘embarrass’ her. Recently, a post was shared on Archana Puran Singh’s Instagram in which she got emotional while thanking her fans after achieving a milestone.

Archana Puran Singh breaks down while thanking her fans

Archana Puran Singh’s Instagram is full of videos which shows the behind-the-scene moments during the shoots of The Kapil Sharma Show. She frequently posts about the show and reveals some of the funny moments that happen behind the curtains. Recently, she posted a video thanking her fans for helping her achieve the milestone of 1 million followers on Instagram and spoke at length about her professional journey to date. While doing so, the veteran actor could not hold back her tears from flowing as she thanked her fans.

Archana Puran Singh even expressed her regret of not being able to express her gratitude to her fans who comment on her posts individually and talked about how she has been blessed with an elongated journey in her professional life because of the love of her fans. She was recently left ‘embarrassed’ when Kapil Sharma joked about her trying to elongate her conversation with Govinda, who was the guest, just for getting more content for her Instagram. Friendly banters between Archana Puran Singh and Kapil Sharma are often seen in almost every episode of the talk show. 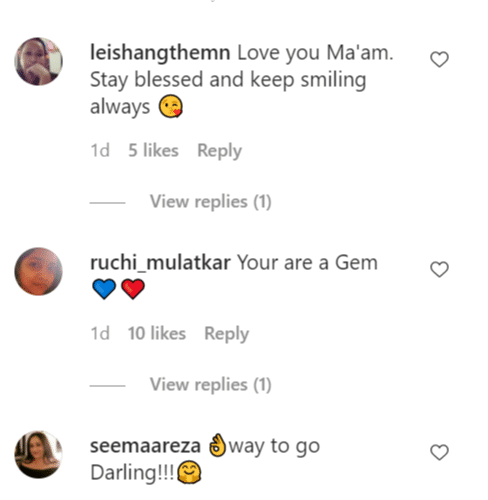 Fans whole-heartedly appreciated the heartfelt gesture from Archana and commented on her post. Some of the comments were to congratulate her while some of the comments simply were for the appreciation of the actor. Archana Puran Singh has acted in several comic films such as Masti and De Dana Dan before entering the world of reality TV shows. Prior to this show, Archana Puran Singh and Kapil Sharma were also seen together in Comedy Circus, where Archana was the judge and Kapil went on to win the show.