Barrister Babu June 12, 2021, episode was all about Trilochan apologising to Thakumaa for what he did to her. Check out the written update of the show. 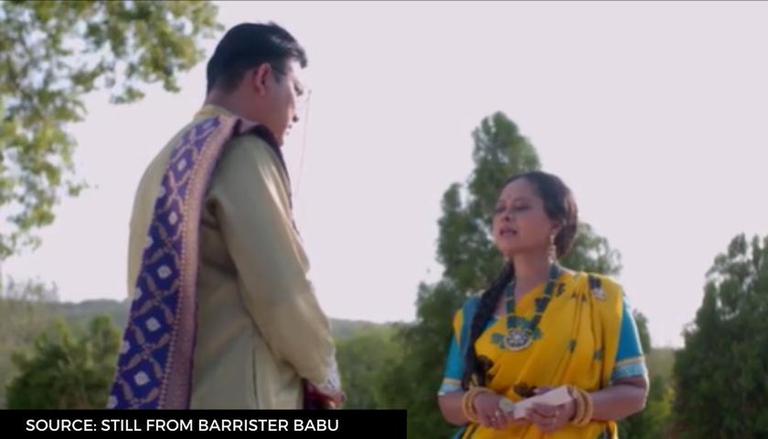 
Barrister Babu 12 June 2021 full episode was about Anirudh convincing Trilochan to apologise to get Bondita back. On the other hand, Thakumaa plans to use Bondita's emotional side to take revenge on Roy Chaudhary. Later, Trilochan apologises to Thakumaa but she puts across an unusual condition.

Barrister Babu June 12, 2021, episode began with Anirudh asking Trilochan to apologise to Thakumaa. Trilochan says it was not his mistake and he was doing just what an ideal son would have done for his family. Anirudh asks what about being an ideal person and supporting your would-be wife? Trilochan asks him not to argue and understand that his thinking is different. He refuses to apologise to Thakumaa. While Bondita hugs Thakumaa, the latter thinks of a way to use Bondita’s emotions to take her away from Anirudh.

Trilochan agrees to apologise to Thakumaa

Anirudh blames Trilochan for being egoistic. Trilochan says he is not egoistic and that he would have apologised the very first day but it was not his mistake. Anirudh gets frustrated and brings a sword. Trilochan asks where he is going. He says he is going to Thakumaa and get his hands cut down as he was disguised as Roopa. Trilochan slaps him and tells him he didn’t know how much he loves Anirudh. If he wants him to apologise to Thakumaa, he will do it.

Thakumaa decides to use Bondita for her revenge

Bondita comes to Thakumaa and wakes her up. She informs her that she has done all the work. Shomik tells Thakumaa that he won’t go to Calcutta until she gets better. Bondita tells him that she will take care of Thakumaa. Shomik agrees and Thakumaa thinks she will take revenge by using Bondita.

Trilochan apologises to Thakumaa and tells her that he is guilty of not taking her responsibility. Anirudh thinks Bondita will be happy knowing that Kaka has realised his mistake and has come to apologise to Thakumaa. Anirudh tells Thakumaa that Trilochan has apologised from his heart. Thakumaa says that how she can believe that he is apologising from his heart and asks him to bow down in front of her instead.

Trilochan bows down and cries in front of Thakumaa to apologise. Thakumaa thinks that he will get punished and Anirudh and Bondita’s relation will burn in this revenge. Trilochan gives Thakumaa her share of the haveli. Thakumaa says if he wants to apologise, he has to do it in front of everyone and he has to blacken his face and ride a donkey to come to her house.