In the video, Brahma Kumari sister Shivani talks about Sidharth Shukla's mother, Rita Shukla's first response to her after her son's demise. 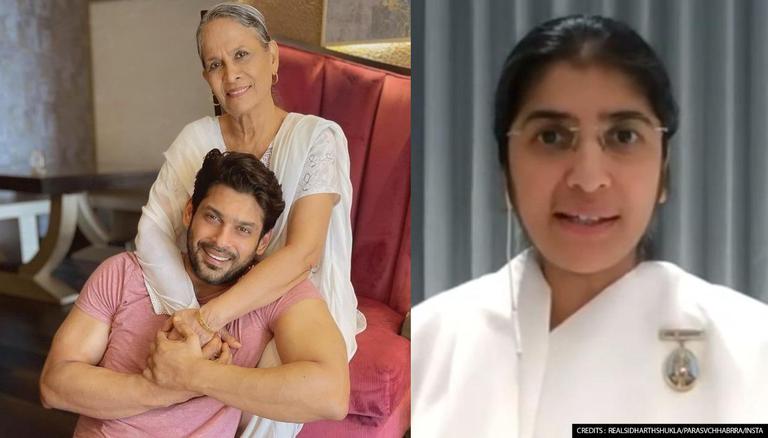 
Popular actor Sidharth Shukla, whose untimely demise sent shockwaves across the film and entertainment industry was honoured during a virtual prayer meeting on September 6. The prayer meeting led by Brahma Kumaris attended by his family and friends was also open to his fans across the world who had been hit hard after his death.

Actor Paras Chhabra who met Sidharth Shukla in Bigg Boss 13 house shared a short clip from the virtual prayer meeting. In the video, Brahma Kumari sister Shivani talks about Sidharth's mother- Rita Shukla's first response to her after her son's demise. Lauding his mother for her divine strength, Brahma Kumari sister Shivani revealed that Rita Shukla had spoken only a few words but her words echoed with god's strength.

In the clip shared by Paras Chhabra, the Brahma Kumari sister is heard saying, "When I spoke to sister Rita on the phone, Sidharth's mother, she just said 'Om Shanti' from the other side of the line. There was so much stability in that Om Shanti, so much power, I was wondering what kind of energy is this that is communicating through this mother's voice. Then I asked her--Rita behen are you all right? And she told me, I have god's strength. What a great soul is Sidharth that his mother's soul at that time only had one thought -- that he will be happy, wherever he goes."

Actor Sidharth Shukla who became a household name with his stint on TV shows such as Bigg Boss 13 and movies like Humpty Sharma ki Dulhaniya breathed his last on September 2 after suffering a cardiac arrest. He was brought to the Cooper Hospital, which confirmed after the post-mortem there were no injuries on his body. Shukla had reportedly complained of chest pain earlier in the day. An official from Copper Hospital told PTI that the actor was announced dead at arrival. He was cremated on September 3. As per sources, the Mumbai Police has ruled out any foul play and has termed it as a natural death.