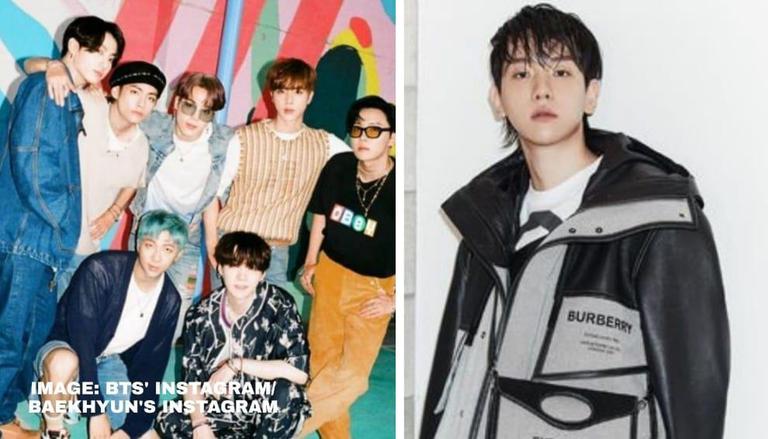 
Korean pop culture has grown to prominence by becoming a major driver of global culture. The K-pop stars also enjoy a massive following on their social media handles. They frequently update their fans and followers with snippets from their personal as well as professional life. From BTS' latest Butter's release to EXO's Baekhyun's military enlistment, these K-pop stars had a busy yet happening week. Here’s a weekly roundup of K-pop stars’ latest activities.

On May 2, the final date for NCT Dream's song from their mini-album was announced on TWICE's social media accounts. Earlier in the month of April, JYP Entertainment had announced the same. TWICE's second mini-album titled Taste of Love features two release dates - June 9 and June 11. The pre-order began on May 5, 2021. The teaser poster shows chairs in white and wooden colours, with one for each member. The table can be seen laden with fruits and juices. With the look of the teaser posters, the theme seems to be tropical or summer.

Recently, the remaining three concept clips for BTS' Butter song featuring J-Hope, Jimin and V were released on Twitter. J-Hope's concept video clip features him sporting an all-black outfit of a jacket, shirt and pants. The candy featured in J-Hope's video is an orange lollipop. Jimin can be seen in a black ensemble with his shirt filled with sequin patterns. He can be seen holding a glass bottle of a soft drink. V can be seen donning a black outfit of a shiny blazer, undershirt and pants with matching black shoes. He is holding a photo strip in his hand and also indulging in some gummy bears.

READ | From BTS as LV's new ambassador to Jennie's scandal: Here's weekly round of K-pop world

READ | Is Justin Bieber planning to collab with K-pop Kings BTS? Here's what we know

On May 6, Baekhyun rang in his 29th birthday. This was also a bittersweet moment for Baekhyun's fans as the EXO member was officially enlisted in military training. The singer gave a glimpse of his new look. In the picture, he can be seen sporting a grey sweatshirt, pants, and a cap to cover his shaved head. He captioned the picture as, "D-1 I’ll go (serve) and return safely".

Blackpink's Lisa and Ten team up for a dance video

Recently, Blackpink's Lisa and Ten collaborated with the Chinese sub-unit WayV. The video was posted by NCT's Ten on his official IG account. The video displayed the two Thai K-pop artists dancing to the tune's of WayV's latest song, Kick Back.