Gauahar Khan recently took to her social media handle to play a game of "Filmy Fun" while she was singing the song "Bahon Mein Chale Aao."


Bollywood and television celeb Gauahar Khan recently took to Instagram to play a game of "Filmy Fun" with her fans. The actor shared a video of her crooning to the iconic song Lata Mangeshkar song Bahon Mein Chale Aao and revealed her top favourite yesteryear actors and asked her fans to comment who was their favourite in the comments.

The actor shared a reel in which she was lip-syncing to the popular song and was giving the right expressions on cue. In the caption, she revealed that her favourite actors were Rekha and Dimple Kapadia and she still loves them and their performances. She also asked her fans who is their favourite actors and told them to drop the names in the comment section.

Netizens were quick to shower their love on Gauahar and expressed that her expressions for the song were excellent and marvellous. Many fans also dropped names of their favourite actors in the comment section of the post. Gauahar Khan's husband Zaid Darbar also took to the comments to call her lady love "pyaaarii" and Monica Bedi wrote, "love your expressions." Read some of the comments below: 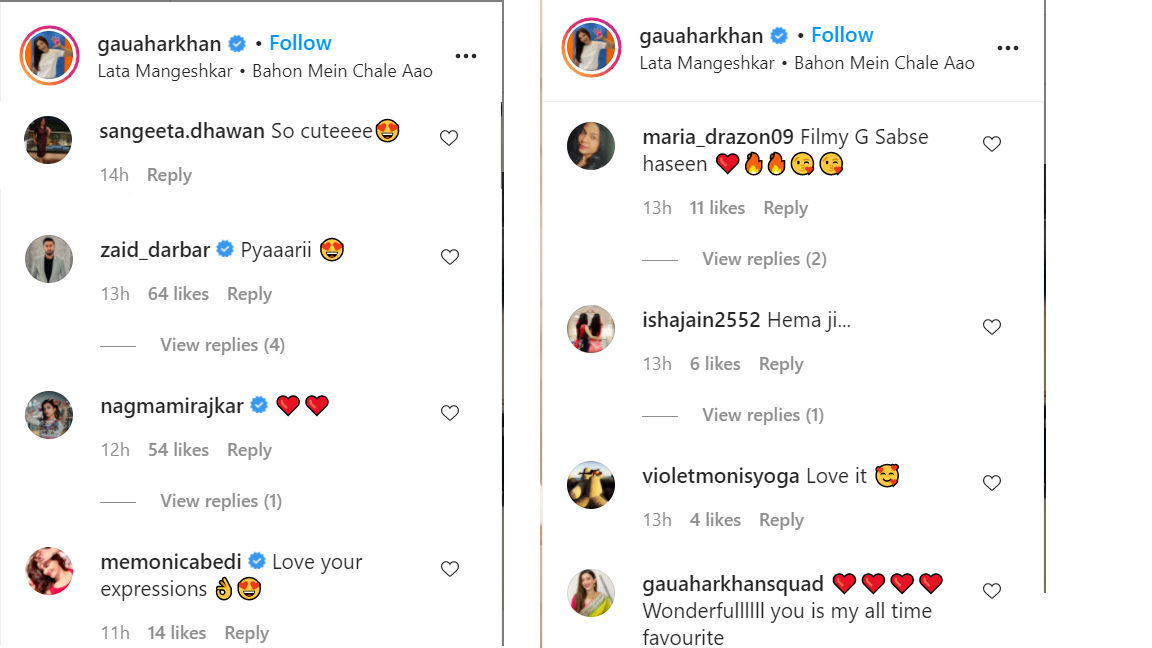 About Gauahar Khan's shows and movies

Gauahar Khan has been a part of several Bollywood movies, television shows and web series. Some of her popular movies include Ishaqzaade, Begum Jaan, Badrinath Ki Dulhania and Rocket Singh: Salesman of the Year. She has also featured in a handful of Bollywood songs like Parda Parda, Chokra Jawaan, Jhalla Walla among others. The actor shot to fame after her stint in a popular reality show which she won. The actor then went on to host the reality show India's Raw Star. She was also a part of the Hindi adaptation of the US comedy series The Office which aired on Hotstar.

Gauahar was last seen in the 2021 web series Tandav on Amazon Prime Video in which she played the role of Maithili Sharan, the Prime MInister's personal assistant. She will next be seen in the social comedy-drama film 14 Phere alongside Vikrant Massey, Kriti Kharbanda and Devanshu Singh which is slated to release on July 9, 2021.