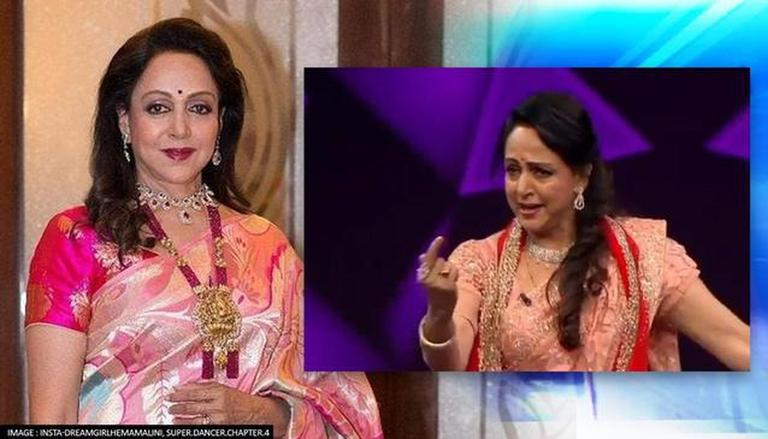 
A sneak peek from the upcoming episode of the popular dance reality show, Super Dancer 4, featuring veteran star Hema Malini is making rounds on the internet. The Sony Entertainment Television reality show is treating the audience with special celebrity guests like actors Poonam Dhillon, Padmini Kolhapure, Mouni Roy and singer Jubin Nautiyal. Check out the latest episode featuring the evergreen veteran actor giving a tough competition to actor Dharmendra on his own song.

Sony Entertainment Television took to their official social media handle to share the sneak peek of the upcoming episode featuring the veteran actor Hema Malini. Donned in traditional attire, the actor got on the stage to dance to the 1975 hit song Yamla Pagla Deewana starring Dharmendra and Hema Malini herself. In the video, the 72-year-old was seen dancing her heart out as she recreated the iconic hook step of Dharmendra.

In the end, Hema Malini stated, ''Dharam ji bolenge mujhe Bharatanatyam sikhao (Dharam ji will ask me to teach him Bharatanatyam)''. Renowned choreographer and judge of the show Geeta Kapur could not help but stand up to her feet to give a standing ovation to Hema Malini's performance. Netizens in the comment section also applauded the performance and spammed heart and fire emojis.

The popular dance reality show features dance prodigies showcasing their skills on the dance floor as they get judged by some of the notable dance professionals in the industry and the Indian audience. On the jury panel, Geeta Kapur and Anurag Basu score the kids based on their skills and entertainment factor. After surviving the cutthroat competitive weeks of elimination, the show is now all set to announce its ultimate winner in the grand finale titled Nachpan Ka Maha Mahotsav on October 9.

On the work front, Hema Malini is dubbed as one of the most successful actors in the mainstream film industry with multiple blockbusters under her belt. Famously called 'Dream Girl, the veteran actor reigned over Bollywood in the 60s and 70s with successful movies to her name like Satte Pe Satta, Sholay, The Burning Train, Seeta Aur Geeta and Kranti. Her film, Dream Girl, and more.