Hina Khan wished her fans and followers a Happy Ramadan as the holy month of Ramadan began. She wished everyone by offering a plate of dates.


On Wednesday, April 14, 2021, actor Hina Khan marked the start of the auspicious month of Ramadan with a sweet Instagram message. To wish her fans a happy Ramadan, the TV star posted several pictures of herself on social media. Hina Khan can be seen in the photos dressed up for the celebrations, wearing a lovely bright yellow salwar suit. She finished off her ensemble with a pair of matching earrings and a finger-ring bracelet.

In some of the images, the actress offers some delectable-looking date palms to her Instagram followers, following the Indian custom of offering sweets to celebrate festivals. She can be seen posing in some of the photos. "Ramadan Mubarak," she captioned the photo, adding a crescent moon emoji in the process. 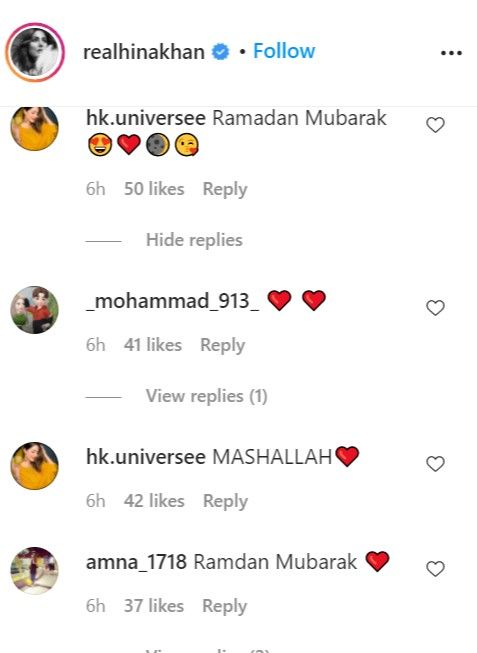 Fans of the actor reached out to her to reciprocate the wishes. Many of them wished her a happy and holy month of Ramadan. Others commented saying that they wished she has a fruitful Ramzan. Some people commented on her attire and said that she looked stunning in the pictures. Others expressed their love and appreciation for the actor on Hina Khan's photos. The post received a total of 543k likes and 6331 comments as of now and still counting.

The holy month of Ramadan started yesterday and will last until the 12th of May. It is the ninth month of the Islamic calendar, and it is the holiest month of the year for those who follow the religion. It begins with the appearance of the crescent moon and ends with the appearance of the next crescent moon. Fasting and prayer are used to commemorate the holy month of Ramadan, which is observed by Muslims.

Hina Khan recently dressed up as a bride for the promo of the forthcoming music video Bedard, in which she appears alongside musician-singer Stebin Ben. On Tuesday, April 13, 2021, the music video's poster was revealed on Hina Khan's Instagram. "#Bedard out on 16th April, Stebin Ben," she posted on Instagram, revealing the poster. Hina Khan is best known for her appearance in the TV show Ye Rishta Kya Kehlata Hai, but she has also acted in a number of other shows. She has also appeared on reality television shows such as Khatron Ke Khiladi. Hina marked her film debut in Vikram Bhatt's Hacked, which was released on Zee5's OTT site.