Hina Khan’s team recently took to Instagram and teased her fans revealing the release date of her upcoming music video. Read ahead to know more.


After the death of Hina Khan's father, the actor’s social media accounts are being managed by her team as she mourns his demise. Hina Khan’s team recently took to Instagram and teased her fans revealing the release date of her upcoming music video. Take a look at the details of Hina Khan's latest music video below.

Hina Khan’s team shared a motion poster that had a tune of the song playing in the background which shows the glimpse of the stars at the end. The song is titled Patthar Wargi and stars Hina Khan along with Tanmay Ssingh. It is sung by Ranvir and B Praak and lyrics are penned by Jaani. The music has also been composed by B Praak and the video is directed by Kamal Chandra. The release date of the song was announced in the caption that read, “#PattharWargi releasing on the 14th of May on @tseries.official Composed and sung by @bpraak @official.ranvir Lyrics by @jaani777. @tanmayssingh9 #ThisEid.” Fans are quite excited about the release and expressed the same in the comments section. Have a look at the fan reactions below. 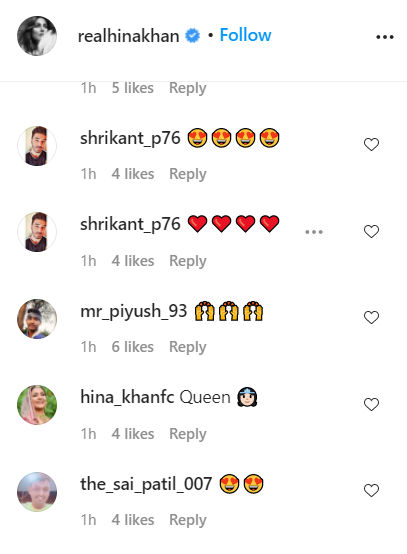 Hina Khan was most recently seen in the music video of Bedard along with Stebin Ben. The song was released on YouTube on April 16, 2021, and has been sung by Stebin Ben. The lyrics of the song are penned by Sanjeev Chaturvedi and it has garnered more than 27 million views on YouTube.

The music video of Bedard starts with the story of Hina Khan's character, whose lover doesn’t show up on their wedding day as he cheats on her with another girl who is a star. However, Hina marries a stranger (played by Sapan Krishna) who wants to get married as soon as possible due to property purposes. Later, the stranger turns out to be a film producer who changes Hina’s life and makes her a superstar. When Stebin is aware of the fact, he regrets his mistake of betraying Hina and tries to apologize but she doesn’t forgive him. Have a look at the Bedard video below.

READ | Hina Khan honours father after his death with heartwarming bio update; fans gush over it

READ | Hina Khan gives emotional reply to a user over comment related to her father
READ | When Hina Khan showed how she aced the no makeup makeup look; watch
READ | Hina Khan reveals what she avoids eating as she gives her detailed night-time diet