India & Pakistan pitted against each other at the T20 World Cup in Dubai. Many celebs turned spectators to the exciting match and shared their experiences. 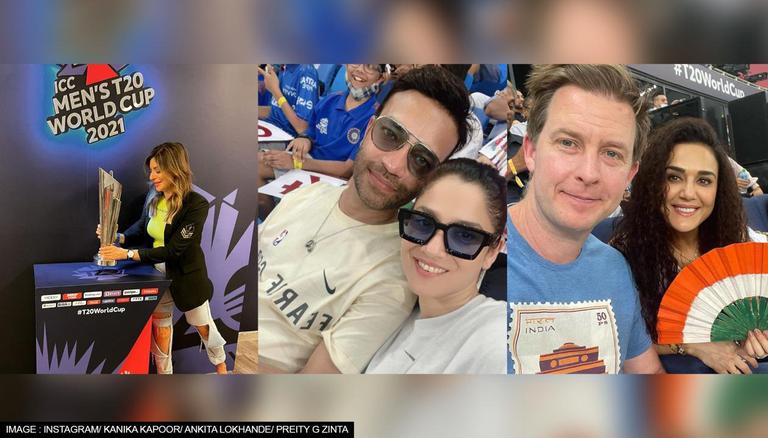 
India and Pakistan pitted against each other at the T20 World Cup in Dubai. Though Pakistan defeated India by 10 wickets to get off to a winning start in the tournament, however, the enthusiasm of the Bollywood stars was no less when it came to cheering for the team in Blue. Several Bollywood stars were present in Dubai to attend the match and cheer for Team India while praying for their win. Stars like Ankita Lokhande, Mouni Roy, Preity Zinta, Kanika Kapoor, and more were present as excited spectators to watch the interesting match.

Pavitra Rishta fame actor Ankita Lokhande took to Instagram and shared a bunch of pictures from the match where she can be seen cheering for the team while waving the National flag. Ankita was seen with beau Vicky Jain and a couple of friends at the stadium. Actor Mouni Roy, who was super excited to watch the match, shared her pictures from the stadium where she was seen rejoicing.

Preity Zinta spent her Karwa Chauth watching the match with her husband Gene Goodenough in Dubai. Sharing a selfie of both of them cheering for India, Preity wrote, “A sporty #karvachauth with my man in blue Red heart Flag of IndiaFlag of India #patiparmeshwar #bleedblue #INDvPAK #t20worldcup2021 #dubai #ting”. She even shared a joke on Twitter, "A friend who is fasting today pointed out that Some of the greatest "sporting" rivals face off today... India-Pakistan; Manchester United- Liverpool; Real Madrid-Barcelona; And then there is Karwachauth!".

Baby Doll singer Kanika Kapoor also posted pictures and videos from the match along with the trophy while sharing her excitement. “India vs Pak. The stadium roars and cheers are giving me goosebumps! Thank you @bookingcom for giving me such a wonderful experience! @icc @t20worldcup @bookingcom”, she wrote.

India started off on a rocky note when they lost the big wicket of Rohit and Rahul but India still had depth in their batting. Suryakumar Yadav however, had managed to get two boundaries, something that left the Indian fans glued to their television sets. Pakistan defeated India for the first time in World Cup history and by 10 wickets and 13 balls to spare. It was a sensational win for Babar Azam and Co. Team India will now shift their focus to the next clash against another tough opponent, New Zealand. Speaking at the post-match, Virat Kohli said that India failed to execute their plans properly, and failed to get off to a good start, and also weren't able to pick up early wickets.