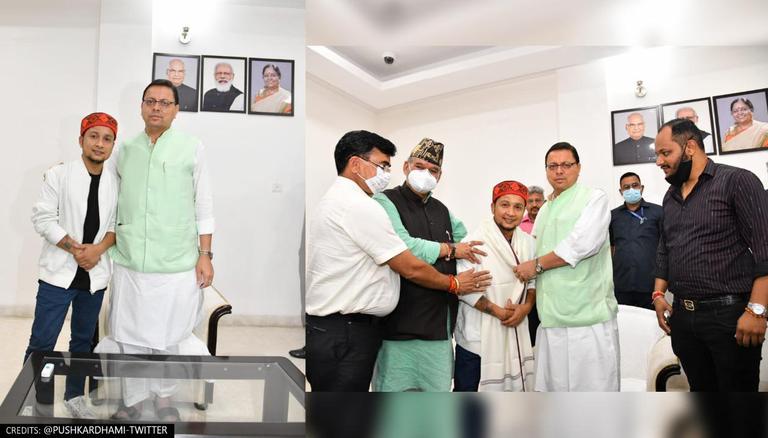 
Indian Idol 12 winner Pawandeep Rajan has amassed a massive fan following after displaying his versatile music talent in Sony Entertainment Television's reality singing show. After achieving this milestone, the singer has accomplished another feat after being chosen as the Uttarakhand’s Art, Tourism, and Culture brand ambassador by Chief Minister Pushkar Singh Dhami. Dhami made the announcement after meeting Rajan at the former's residence in Dehradun.

Taking to his Twitter account, the Uttarakhand CM wrote “@RajanPawandeep has raised the value of “Devbhoomi” in the world of music, our government has decided to make him the Brand Ambassador of Uttarakhand’s Art, Tourism and Culture."

The twenty-five-year-old singing sensation, who hails from Champawat in the Kumaon region of Uttarakhand, won the 12th edition of the music reality show on August 15. Rajan was one of the most loved contestants on the show and won handsome prize money of Rs 25 Lakh, a Maruti Suzuki Swift car, and a trophy.

He was also lauded by the state's chief minister after he won the show. Taking to his Facebook handle, the CM wrote,  “By winning Indian Idol and millions of hearts across the country through his singing, Pawandeep has brought glory to Uttarakhand, from where he belongs. I congratulate him on his achievement and wish him all the best for a bright future ahead."

The show's finale was held on August 15 and was graced by Shershaah stars, Kiara Advani and Sidharth Malhotra, The Great Khali and other stars who cheered the contestants. The judges' panel included music maestros Himesh Reshammiya, Vishal Dadlani and Sonu Kakkar, who filled in for the absence of her sister Neha Kakkar. The entire family of Pawandeep Rajan was present on the show and were seen thrilled after they witnessed his big win, as the finale ran for 12 hours until midnight.

On the other hand, Arunita Kanjilal and Sayli Kamble were runners-up while the fourth position was bagged by Mohd Danish followed up by Nihal Tauro and Shanmukhapriya. Rajan is also the winner of The Voice India season 1. After his win, several fans took to his Instagram post and dropped in congratulatory messages in the comments section with many of them also pouring in hearts and fire emojis.

For the unversed, Indian Idol is the Indian version of the Pop Idol format that has aired on Sony Entertainment Television since 2004 and has completed 12 seasons since.