Actor Jay Bhanushali recently took to his social media page to post a picture with his youngest daughter Tara. The picture has been receiving a lot of love.

Television actor and host Jay Bhanushali recently took to his Instagram page to post a stylish picture with his youngest daughter Tara Bhanushali. The picture shows Jay placing his hand over his daughter's head as if blessing her. He captioned the picture with "Ayushman Bhava."

In the picture, Jay Bhanushali’s daughter is looking fancy in a green and golden puffed gown with a matching hat. Jay, on the other hand, also looks dashing in in a matching white vest and pants with a light blue shirt underneath. He has styled his look with a golden cloth in the front pocket with sunglasses completing his outfit. The picture was clicked in Jaipur in front of amazing background of a palace's pathway with flowers on both sides.

As soon a the picture was posted, Jay's fans were quick to comment on the actors' post and could not stop gushing about how cute the father-daughter duo look in the pictures. His comments section is flooded with heart and starstruck emojis. Jay's friends and fellow TV celebs like Rashami Desai and Charlie Chauhan also chimed in to comment on how adorable the picture is. Read some of the comments right below: 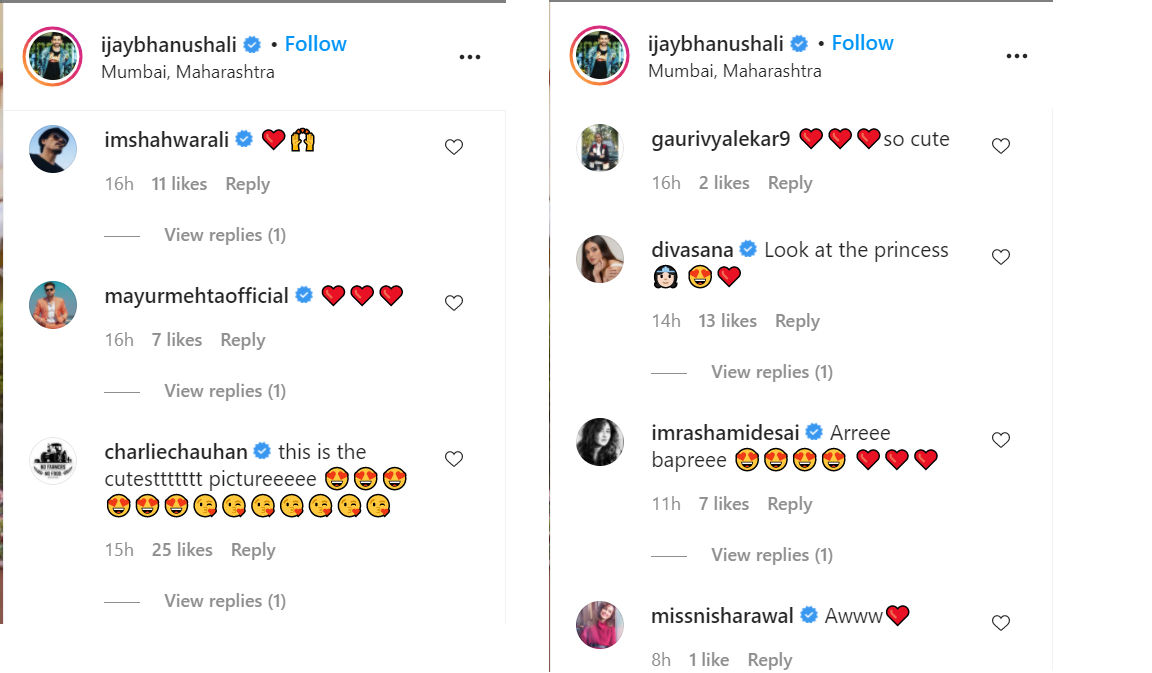 Jay Bhanushali's latest video on Instagram garnered a lot of love and laughs from his fans. In the video, Jay Bhanushali’s wife Mahhi Vij and him were trying to do the viral gravity test while they were cutely interrupted by their pet pug who came in between to shower kisses on Jay.

READ | Rashami Desai goes bold with an all-black dress; says ‘many won't get the new me’

Jay and Mahhi had adopted two kids, Khushi and Rajvir, in 2017 and in 2019 gave birth to their youngest daughter Tara. The actor often posts pictures and videos with his wife and kids on social media. Check out some of Jay Bhanushali’s photos with his family right below:

Jay Bhanushali was last seen as a contestant in the reality tv show Khatron Ke Khiladi which aired in 2020. He has been a part of a lot of television serials like Kasautii Zindagi Kay, Dhoom Machaao Dhoom, Geet and Kayamath. Jay was the second runner up of dance reality show Jhalak Dikhla Jaa and post that has gone on to host a number of reality shows like Dance India Dance, Super Dancer, The Voice and many more. He was also the winner of the couple dance reality show Nach Baliye in which he participated with his wife Mahhi Vij. The actor made his Bollywood debut with Hate Story 2 in 2014. The actor has currently taken a break from acting and hosting and is focusing on his family life.