Television actress Jennifer Winget, best known for her role in Beyhadh, recently took to her Instagram to address the lockdown in Mumbai. Scroll for details -


In the wake of the rising cases of the Covid-19 virus in the state, the government of Maharashtra imposed a 15-day lockdown in the state. Various celebrities took to social media to address this lockdown. Most recently, TV actress Jennifer Winget shared a photo of herself on her Instagram story and urged her fans and followers to stay at home. 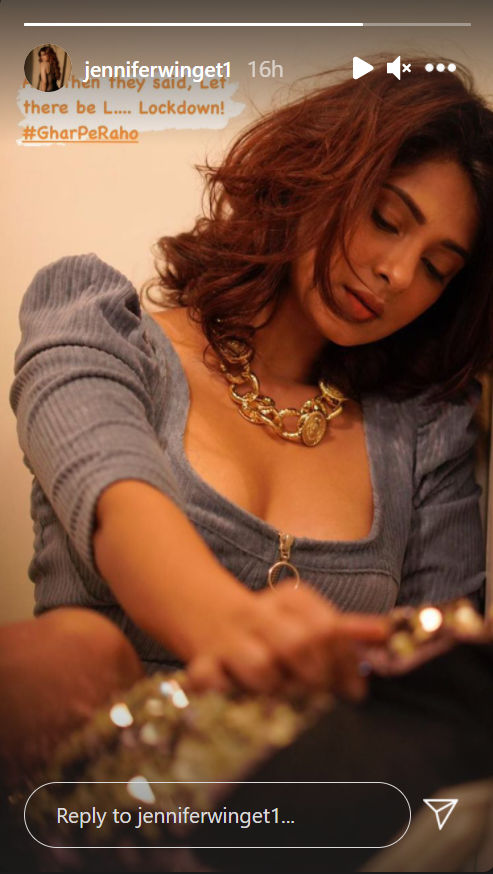 Jennifer Winget took to her Instagram stories and shared a photo of herself, She was seen sporting a grey top with a statement golden neckpiece. She sported a messy hair look as her eyes were downcast. She addressed the recent lockdown by writing, "And then they said let there be lockdown again". The actress also asked her fans and followers to stay at home as she used the hashtag #Gharperaho.

A look at Jennifer Winget's recent project and career

Jennifer Winget was last seen in the Hindi web series Code M. The series also featured actors like Rajat Kapoor, Seema Biswas and Tanuj Virwani in lead roles opposite Winget. The actress played the role of Army lawyer Monica Mehra who gets roped in to solve a case that seems like an open and shut case, of the death of an army officer and two militant suspects who are killed in an encounter. However, as the facts unravel, she understands that the case is way more complicated than it appears to be.

The actress gained popularity for her portrayal of Dr Riddhima Gupta in the show Dill Mill Gayye. The show also featured her ex-husband Karan Singh Grover in the lead role. The show was quite popular amongst youngsters. The actress was later seen in Sanjay Leela Bhansali's television show Saraswatichandra as Kumud Desai opposite Gautam Rode as Saraswatichandra. Jennifer further gained popularity for her role of an obsessed lover Maya Mehrotra in the show Beyhadh. In 2018, she featured opposite TV actor Harshad Chopra in the show Bepannaah. The actress has also featured in other shows like Kasautii Zindagii Kay, Kahiin To Hoga, Kyaa Hoga Nimmo Kaa and Sangam.

READ | Jennifer Winget challenges paps to spot her if they can: 'Why should I be out of mind?'
READ | From Nia Sharma to Jennifer Winget, TV celebs who ruled social media this week