Kishwer Merchant's Weekly Round-Up; From Pregnancy Announcement To Her Thoughts On It

Kishwer Merchant announced her pregnancy and her thoughts on embracing motherhood at the age of 40 in the week that went by. Read on to know more.

One can safely say that the week that went by was a big one for Kishwer Merchant, who took to various social media sites in order to reveal that she's expecting her first child with her husband, the reality star-turned-actor/singer/music producer Suyyash Rai. In addition to that, Merchant also made headlines for sharing her thoughts about conceiving a child at the age of 40 in the traditional way. This article essentially documents each and every known event that transpired in Kishwer Merchant's life in the past week. Read on to know more.

Also Read: Kishwer Merchant On Being Pregnant At 40: 'Age Is Just A Number'

The announcement of Kishwer Merchant's Pregnancy:

Also Read: Throwback To When Kishwer Merchant Cradled Her Baby Bump In Video From Maldives Trip

The above post was quick to garner reactions from almost all corners of Instagram. Some of the people who followed the comments section of the above post were Kishwer Merchant's fellow industry mates. Some of them can be found below. 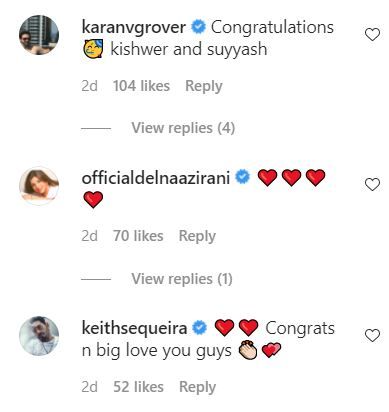 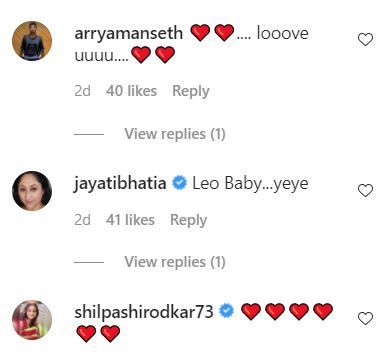 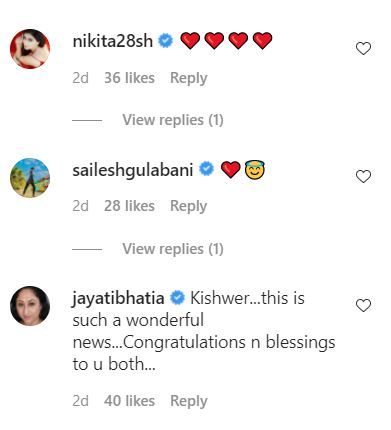 While speaking about becoming a mother after the age of 40, the to-be mom, as reported earlier, revealed that she feels no kind of stress that one typically associates with simultaneously embracing pregnancy and middle-age. As per her, age is simply a number, and becoming a mother at the age of 40 is "cool". On the other hand, BollywoodLife reports that while Kishwer is all calm and composed, Suyyash, while sees the pregnancy as a "fabulous" thing in its entirety, is indeed a little tensed and super nervous. On the subject, Kishwer was also quoted by the officials at BollywoodLife saying that the pregnancy did come as a bit of a surprise to her.

As far as Kishwer Merchant's previous projects are concerned, she was last seen in a show known as Kaisi Yeh Yaariaan. On the same, she was seen essaying the character of Nyonika Malhotra. The show, which has a rating of 8.0 on IMDb, can be streamed on Voot. More details regarding Kishwer Merchant's upcoming projects will be shared with the readers as and when made available.