Nikki Tamboli recently reacted to and praised Abhinav Shulka for his dashing looks after he posted a black and white shirtless picture on Instagram.


South Indian actor Nikki Tamboli gained a lot of fame and recognition after her stint in a popular reality show. The actor made a lot of bonds in the show and shared a good equation with married couple Rubina Dilaik and Abhinav Shukla who were also the contestants in the show. Abhinav Shukla recently posted a black and white picture on his social media page and good friend Nikki Tamboli was quick to react to his picture with a cheeky reply.

READ | Nikki Tamboli hits back at trolls, asks if they were 'paid' to campaign against her

Television actor Abhinav Shukla was last seen in a popular reality show with his wife Rubina Dilaik in which he got eliminated just a week before the finale. Rubina however was saved by the audience's votes and emerged as the winner of the show. The actor recently took to Instagram to share a picture clicked by his good friend and fellow television personality Apurva Agnihotri. The picture shared is a black and white one which shows is a close-up shot of a shirtless Abhinav smiling for the camera. While the actor's post was able to get a lot of reactions from the fans, it is Nikki Tamboli's comment that went viral. Nikki praised the actor for his dashing looks and commented, "Ooooo! My screen just burnt" followed by fire emojis. Take a look at Nikki Tamboli's comment on Abhinav Shukla's Instagram post below.

READ | Nikki Tamboli cheekly asks "When shall we expect yours?" as Rubina poses with a baby

Many of Abhinav's fans chimed in on Nikki's comment with approval. Her comment has over 1400 likes and more than 100 replies from fans. The fans commented on Nikki's and Abhinav's friendship and hoped that they always maintain their bond with each other. Abhinav Shukla has not yet reacted to Nikki's comment. 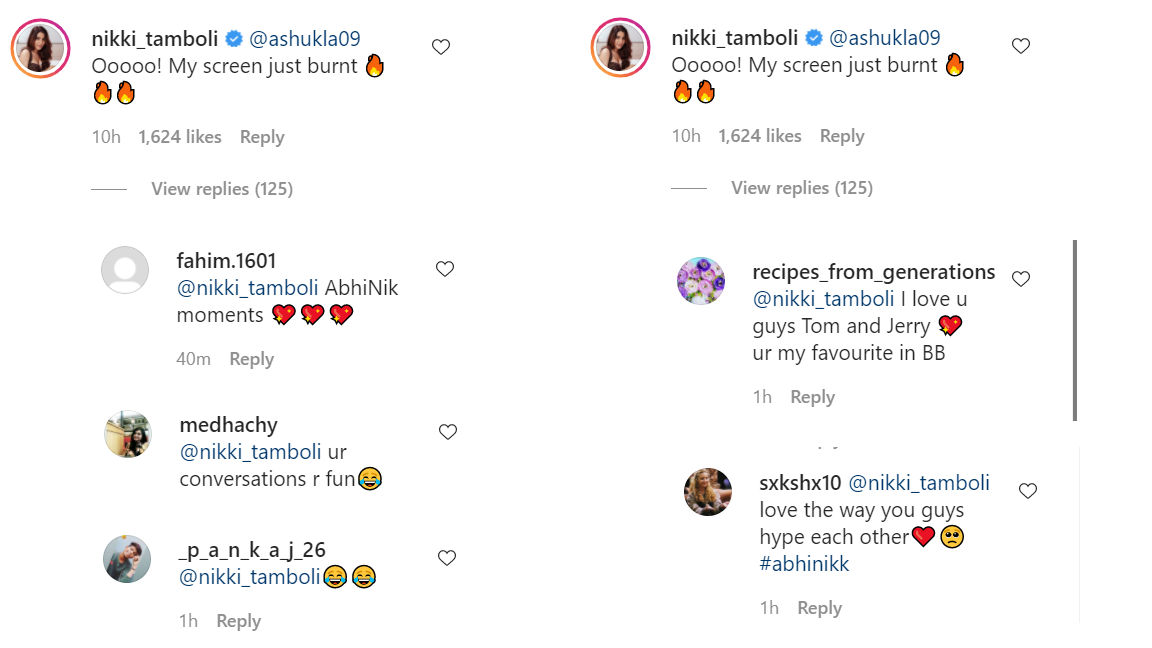 This is not the first time Nikki has left a cheeky comment on her friend's pictures. The actor had recently dropped a comment on Rubina Dilaik's Holi post. In the picture, Rubina is posing with her friend's baby boy and Nikki teased the Shakti actor by asking, "Awww such a cute little munchkin!  when shall we expect yours?” Her comment led to a cute banter between Rubina and Nikki in the comment section.