Nikki Tamboli Tests Positive For COVID-19; Says, 'I Am Self Quarantined'

Nikki Tamboli took to Instagram on Friday, March 19, 2021, to reveal that she has tested positive for the novel coronavirus. Read here

Reality TV show fame Nikki Tamboli took to Instagram on Friday, March 19, 2021, to reveal that she has tested positive for the novel coronavirus. The actor made the announcement where she informed fans about her health condition. Nikki Tamboli, who was has been busy shooting for her upcoming music videos, revealed that she has gone into isolation and is taking necessary precautions.

Taking to her Instagram handle, Nikki wrote, “I have been tested COVID positive early this morning”. She added, “I am self quarantined, and taking all the precautionary measures and medications on my doctor’s advice”. Nikki also went on to, “request all the people I have come in contact with within these past few days to get tested too”. She also said, “I will forever be grateful for all your love and support”. The actor concluded by saying, “Please be safe, wear your mask always, sanitise your hands regularly and maintain social distancing. Love and light”. Take a look at the post below.

Fans could not stop themselves from commenting on the post shared by Nikki Tamboli. The post shared by the actor received several likes and comments from netizens. Some of the users sent speedy recovery notes, while some are showering their love and praise for her. One of the users, “get well soon Ma'am”. While the other one said, “praying that you return stronger”. Check out a few comments below. 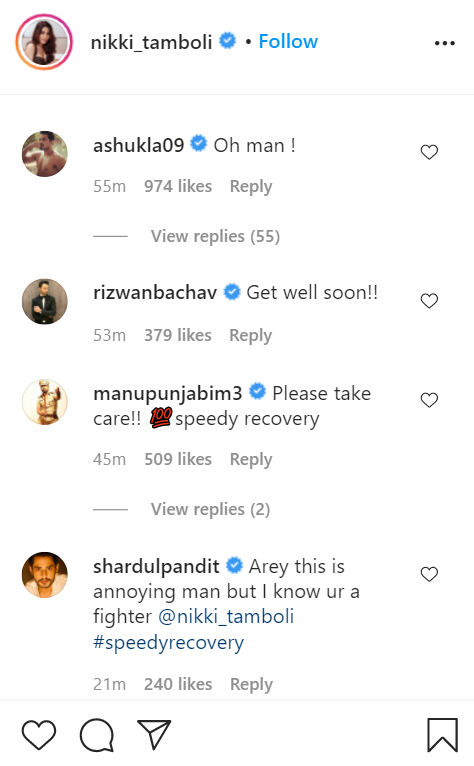 Nikki Tamboli is best known for her roles in several South Indian films. Chikati Gadilo Chithakotudu, a Telugu horror-comedy film, marked her debut. Nikki co-starred in the film with Sayantani Guhathakurta, Bhagyashree Mote, and Adith Arun. She later appeared in the Telugu suspense thriller Thipparaa Meesam. In the film, Nikki was joined by other well-known actors such as Rohini, Bannerjee, and Raghuvaran. The film received mixed reviews from both audiences and critics.

READ | Actor Nikki Tamboli woke up like THIS on a Sunday morning! See pictures

Nikki made her Tamil film debut with Kanchana 3. Raghava Lawrence directed the film, which is an action-comedy horror film. Raghava Lawrence plays two characters in the film, along with Oviya, Vedhika, Nikki Tamboli, and Ri Djavi Alexandra. Nikki played Divya, who was the cousin of one of the film's main characters. Critics gave the movie mixed reviews. Nikki was most recently the second runner-up on a popular reality TV show. Meanwhile, Nikki Tamboli will be seen in an upcoming music video which will be her music video debut and she also has a number of projects in the kitty.