Uttaran actor Rashami Desai is missing her best friend and fellow reality TV show contestant Devoleena Bhattacherjee. She recently took to her Instagram Story to share a picture with the friendship song Count On Me by Bruno Mars. The two were photographed in the reality show. Rashami Desai styled her best friend's hair.

Rashami wore a long red kurta as her hair was styled in a french braid. She intently styled Bhattacherjee's curly hair, who patiently waited for her friend to finish. "Missing you", Rashami exclaimed with tons of kissing emojis for her best friend. 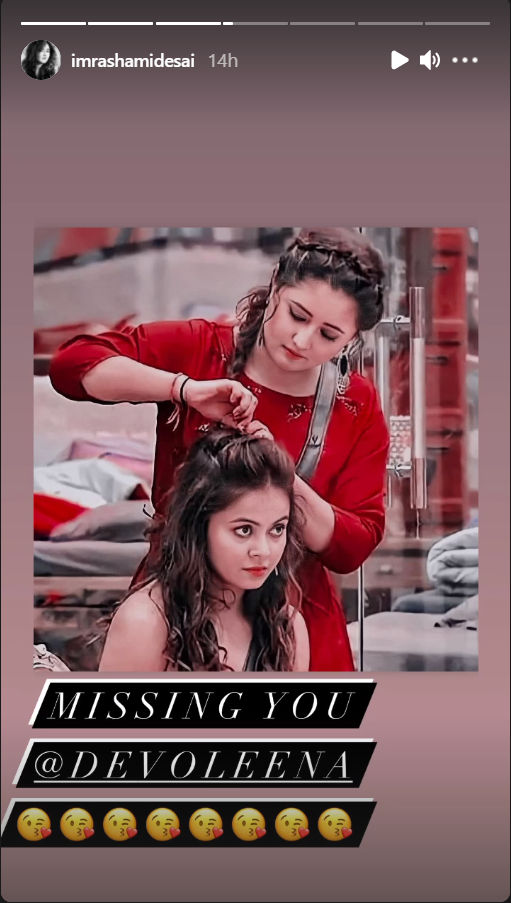 Devoleena and Rashami have shown off their friendship on their social media accounts many times. The two had participated in a cookoff organised by Mother Dairy in May 2020, a few months into the lockdown. The actors competed to see who would make the better cheeseburger among the two. While the results were not announced, the actors invited their audience to decide the winner of the competition based on the burger's looks.

READ | Rashami Desai talks about going through depression, says 'people made fun of me'

The two actors spent a day in the sun together on March 12, 2020. They clicked a series of pictures in a park and Rashami added some sweet captions for her BFF in the caption. In the first image, she complimented their bond saying it "instantly light's up everyone's faces". In another picture, she wrote that she had a great day with her friend and titled their friendship as "Devoshami". In the last picture, the two besties made funny faces for the camera and Desai said that she was in a happy and peaceful space with Bhattacherjee.

The best friends showed off their unbreakable bond in the reality show. In a video reshared by Rashami Desai on her Instagram handle, Devoleena can be seen holding her hand and consoling her, telling her she isn't "alone". Devoleena went onto say that her situation was "completely understandable" and that Rashami could confide in her.

On March 9, 2021, Rashami Desai gave a glimpse into her brand new series Tandoor. Desai released a short video and the first poster of the series. According to the caption, the crime thriller series would be focusing on a heinous crime caused by a shameless murderer. The series, featuring Rashami and Tanuj Virwani, would be available on Ullu. The video received more than 245,000 views on Instagram.