Parle-G reference in ‘Sacred Games 2’ became a talking point. The biscuit brand also joined in the fun by making memes, while Swiggy, Netflix replied too.

It was just a few years ago that Zandu Balm sales had soared after it was used in the track ‘Munni Badnaam Hui’ from ‘Dabangg’. Could we see the same happening with Parle-G biscuits as well? Parle-G is India’s largest biscuit-maker, but don’t be surprised if it gets a further boost after its reference in ‘Sacred Games 2’ became a talking point on social media. The biscuit brand also joined in the fun by reacting to it, while Netflix and Swiggy also had hilarious responses.

‘Sacred Games’ has always been a favourite as far as meme-makers are concerned, and it was not different this time as well after the second season hit Netflix on August 15. A dialogue said by Jatin Sarna aka Bunty, “Yaha Parle-G khaana pad raha hai kali chai mein dubokar’ (I have to survive by eating Parle-G biscuits dipped in black tea) went viral and sparked memes too. The handle of Parle-G on Twitter came up with some memes of their own, using how the dialogue summed situations like that of a start-up entrepreneur, a student away from home, every graduate with a new job or every artist trying to break new ground.

Here are some of the memes: 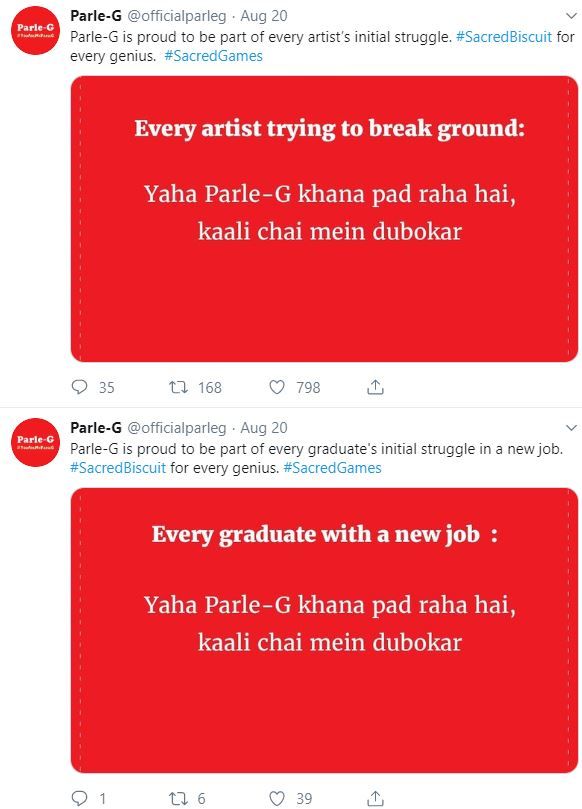 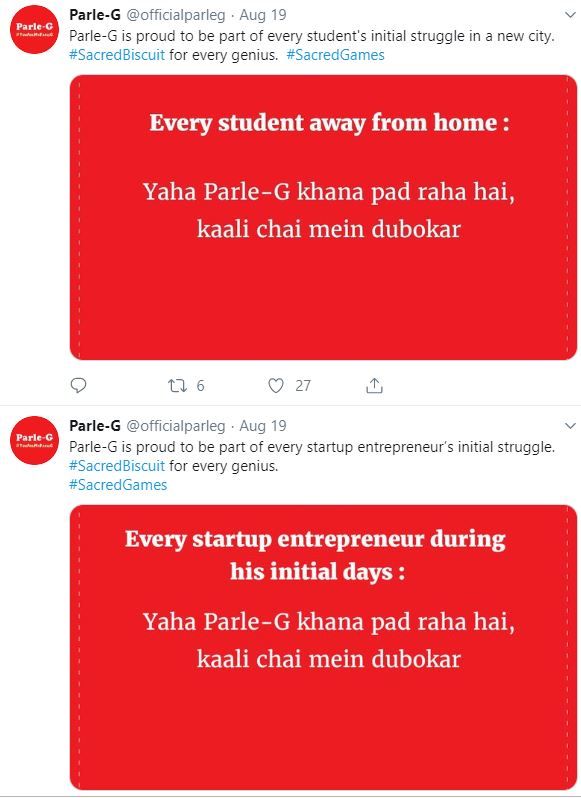 Netflix had their own take to it, writing, “Season 1:  0 mentions of Parle-G. 0 hit songs written by Bunty.  Season 2: 1 mention of Parle-G.  Bunty becomes a world-famous producer, casino owner and lyricist. Coincidence? We think not.”

Coincidence? We think not. https://t.co/VJKyOBu8Bt

Later, Swiggy joined the bandwagon, quipping if they should send ‘chai.’ Netflix then clarified that it was the end of the month, so ‘kaali chai’ was the only way.

@officialparleg Should we send chai?

It's the end of the month. Please send Kaali chai.

Netflix didn’t budge and came up with another ‘Sacred Games 2’ reference, Pankaj Tripathi aka Khanna Guruji’s ‘Balidan Dena Hoga’ line, stating that they had a lot of discounts, so the milk tea needn’t be sacrificed.

Meanwhile, ‘Sacred Games 2’ landed in another row, after a scene where Saif Ali Khan’s character is seen throwing the Kada, a religious ornament worn on the wrist, into the sea emerged. Two politicians Manjinder Singh Sirsa and Tajinder Singh Bagga have expressed their anger. Both demanded that the scene be removed while the latter even filed a complaint against one of the directors, Anurag Kashyap.