As Anokhi rescues Shaurya, his family takes care of him. Devi blames Anokhi for everything. Read 'Shaurya Aur Anokhi Ki Kahani' 19 May written update below. 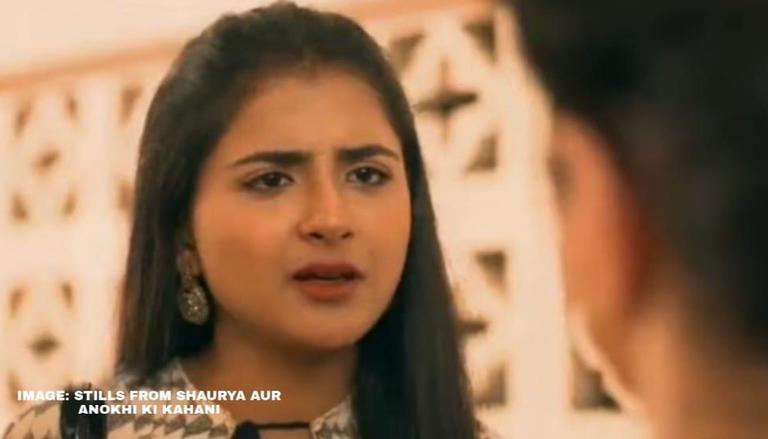 
Shaurya Aur Anokhi Ki Kahani's latest episode starts with Anokhi moving away from Shaurya as his family comes and takes care of him. She sits in a corner while Devi asks Shaurya about his health. Aastha meets Anokhi and asks her if she wants to meet Shaurya but she denies it as his family is with him. Shaurya comes out with his family when he spots Anokhi. He goes to her but suddenly a car comes close to him. Everyone is shocked to see Shagun come out of the car. She takes Shaurya by his shoulders and prevents him from meeting Anokhi.

Shaurya does not have the strength to protest. Gayathri and other leave except for Devi, Shaan, Aastha, Anokhi, and Ahir. Shaan is about to thank Anokhi but Devi stops him. She asks her to not apologise as she still holds her responsible for the issue in her heart. She adds that she is just glad that they both have got something which they lost; she got her son while she found her respect. Anokhi leaves with Ahir.

Anokhi and Ahir come to the room and are shocked to see Babli holding Vineet. Vineet tries to run by pushing them but Ahir catches him and hands him to the police. Vineet tells that he is a lawyer and can easily escape from the case. Ahir warns him that he has kidnapped someone and it is not a small issue. He adds that he will certainly get punished. Vineet swears to ruin their life.

Devi rushes to the hospital. Yash tells the doctor has confirmed that there are no major injuries but they need to run a CT scan for internal ones. Devi sighs in relief and Shaurya asks to let him meet Anokhi as he is fine now. Shagun gets furious and leaves while Devi follows her. Here, Ahir and Anokhi praise Babli. She asks about Shaurya and Anokhi tells her that he is with his family. Babli realises Anokhi is tired and asks her to rest.

Devi and Shagun have a word. Shagun tells her that she listens to her but in the end, Shaurya and Anokhi reunite. Shagun adds that she learned that she should not trust anyone, while Devi assures her that she will make sure she gets married to Shaurya. Babli feels bad for Anokhi as Ahir tells her that Shaurya's family blamed her for everything. The duo wants Anokhi to stay away from Shaurya.