Actor Sriti Jha, on Thursday, shared a picture featuring Sharddha Arya to her social media handle while hinting that there could be a Kumkum-Kundali crossover.

Source: Snips from the shows


As Maharashtra CM Uddhav Thackeray has announced a 15-day lockdown in the state, the team of Ekta Kapoor's shows, including Kumkum Bhagya and Kundali Bhagya, has headed to Goa to continue the shoot. And now, actor Sriti Jha has dropped a hint at Kumkum-Kundali's crossover episode via the story session of her verified social media handle. On Thursday, Sriti shared a boomerang video, featuring Kundali Bhagya lead Sharddha Arya.

In the boomerang video, presumably shot at the airport, the duo can be seen blinking their eyes while wearing face masks. On the other hand, teasing her 1.8M Insta fam jam, Sriti wrote a brief caption to it, which read, "The crossover episode no one asked for @sarya Akshay ko kisne maara? (sic)". However, the makers of the show haven't made any official announcement confirming the crossover episode.

A peek into Kumkum-Kundali crossover episode 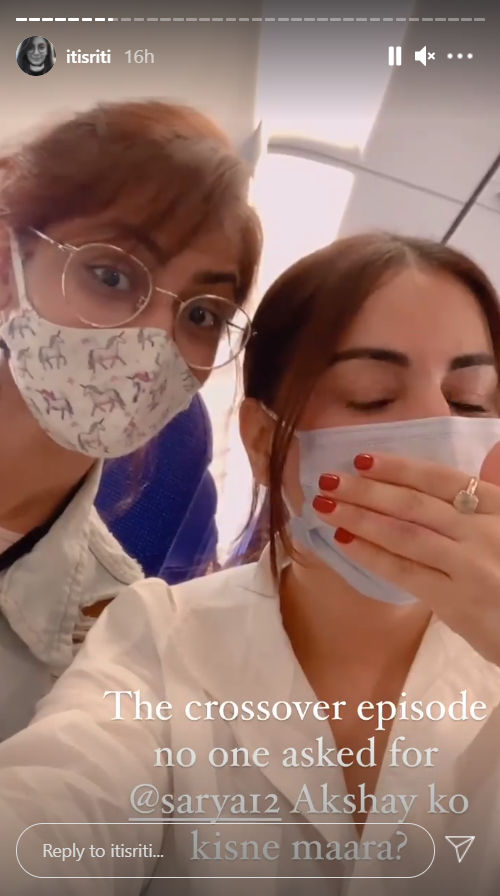 A peek into Kumkum Bhagya episodes

As per the latest episodes of Sriti Jha and Shabir Ahluwalia's Kumkum Bhagya, Baljeet performed the rituals of Pragya's grah-pravesh. Meanwhile, Aliya and Mitali apologised to Pragya for their evil deeds in the past. However, Tanu interrupted their happy moment as she accused Abhi of raping her, a day before their wedding was supposed to take place. The police arrested Abhi and Alia blamed Pragya for it.

A peek into Kundali Bhagya episodes

On the other side, in the latest episodes of Shraddha Arya and Dheeraj Dhoopar starrer Kundali Bhagya, ACP Vijay Bindra arrested Preeta for murdering Akshay. Meanwhile, an agitated Karan refused to meet Preeta in jail. However, he tried to bail her out, but in vain. In the Luthra house, Sammy suspected Mahira after she got a call from a mysterious man while Pammi decided to teach a lesson to Sherlyn as the latter insulted her.

As mentioned earlier, the CM of Maharashtra announced strict restriction and night curfew on account of a spike of Covid 19 cases in the state, numerous TV shows will be shot in Hyderabad and Rajasthan. As per various online reports, Star Plus shows Imlie and Ghum Hai Kisikey Pyaar Meiin's shoot will move to Hyderabad. Meanwhile, another TV show, Pandya Store will be shot in Bikaner. Neha Marda-starrer Kyun Rishton Mein Katti Batti is said to be shot in Surat.