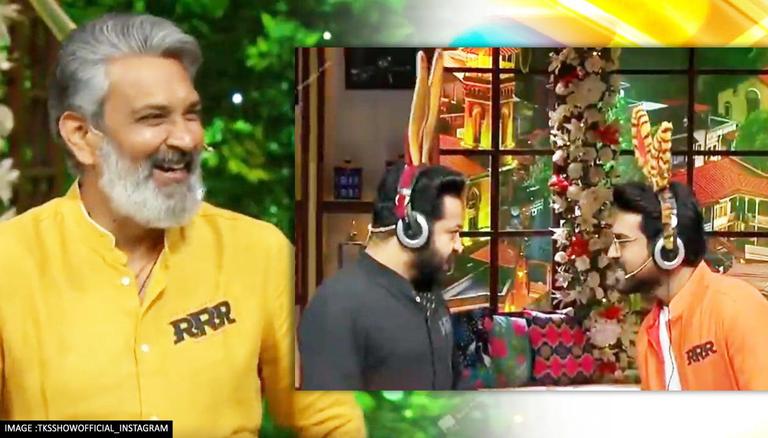 
One of the most celebrated filmmakers SS Rajamouli is currently gearing up for the release of his next magnum opus, RRR. The director, who is known for his record-breaking movie series Bahubali, is now set to bring another action drama based on India's fight for freedom. RRR stars Ram Charan and Jr NTR in the lead roles. While the film's cast is currently engaged in promotions, they are also set to appear on The Kapil Sharma Show. The show's latest promo saw the film's cast having a fun time with host Kapil Sharma. Ram Charan and Jr NTR also played the game of read my lips and left the director in splits.

The latest promo of TKSS saw SS Rajamouli, Ram Charan, Jr NTR and Alia Bhatt graced the show. Rajamouli, Ram Charan and Jr NTR wore colourful shirts with RRR's logo. Alia Bhatt was dressed in a peach coloured Salwar Suit. While RRR's team talked about their film and personal lives with Kapil Sharma Show, they were also asked to play a hilarious game. Both Ram Charan and Jr NTR were given a pair of headphones each with some funny animal ears. Ram Charan was asked to say a funny line and Jr NTR failed to guess it while listening to loud music.

Ram Charan was later given the line, "Machhli jal ki rani hai, meri nani shaani hai." While Jr NTR guessed half of it right, Ram Charan had to give it up as he could not remember the whole sentence. The two actors left SS Rajamouli, Ali Bhatt and others laugh their hearts out with the funny game. Watch the promo here.

A post shared by The Kapil Sharma Show (@tksshowofficial)

RRR stars Ram Charan and Jr NTR as freedom fighters Alluri Sitarama Raju and Komaran Bheem. The film is a period drama that charts the story of Raju and Bheem in the 1920s, who braved the British together in the pre-independence era. The fictional retelling narrates how a British governor captured a girl and Komaran Bheem becomes her protector. Alluri Sitaram Raju is then deployed to catch hold of him but he rather joins hands with Bheem and fights against the British. The film is scheduled to release on January 7, 2022. The film also stars Ajay Devgn and Alia Bhatt in pivotal roles.