American singer Ariana Grande is all set to be the new judge as she replaces Nick Jonas on NBC’s The Voice. Fans cannot keep calm on this news. Read.

American singer Ariana Grande is all set to be the new judge as she replaces Nick Jonas on NBC’s The Voice. The Thank U, Next fame star announced that she will be joining John Legend, Kelly Clarkson, and Blake Shelton on the panel for season 21. Along with the statement, the actor shared a glamorous picture on the sets of the show which is truly unmissable.

Taking to her Instagram handle, Ariana revealed that news with a bold look that is sure to leave fans stunned. The actor is seen sitting on one of the show’s famous swivel chairs wearing a leopard-print dress. She completed the look with a black belt wrapped around her waist, along with a matching bag and shoes. Along with the picture, she wrote, “surprise !!! i am beyond thrilled, honoured, excited to be joining @kellyclarkson @johnlegend @blakeshelton next season ~ season 21 of @nbcthevoice ! ðŸ¤ @nickjonas we will miss you”. Take a look.

As soon as Ariana Grande shared the news online, netizens were thrilled and flooded the comment section with all things happy. Some of the users commented on how excited they are to watch her judge the reality tv show, while some could not stop going gaga over the news. One of the users wrote, “major and so exciting”. Another user wrote, “I feel a new favourite show coming!! You’re gonna be so good at this”. Take a look at a few more comments below. 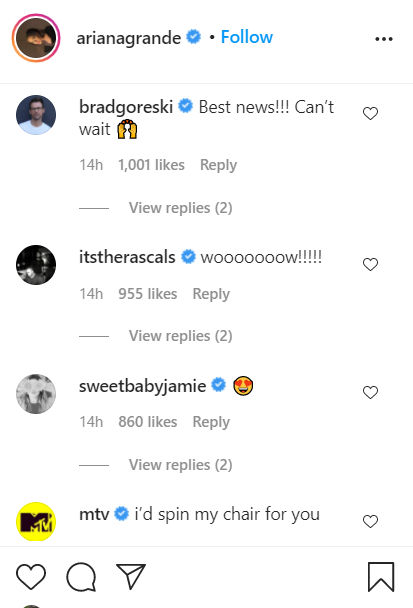 Ariana Grande will join a long line of singers who have made appearances on the show, including Christina Aguilera, Alicia Keys, Gwen Stefani, Miley Cyrus, and Nick Jonas, who is on the current season. MGM Television, Warner Bros Unscripted Television in collaboration with Warner Horizon and ITV Studios produce The Voice. John de Mol created the show, and he also serves as an executive producer alongside Audrey Morrissey, Mark Burnett, Kyra Thompson, Amanda Zucker, and Adam H. Sher.

READ | 'Grateful': Ariana Grande reacts to Grammys 2021 win for 'Rain On Me' with Lady Gaga