'Brooklyn Nine-Nine' Season 8 BTS Picture Sees Cast All Masked Up; Check It Out

Brooklyn Nine-Nine Season 8 BTS picture was shared by the official account of the show. It was served as a 'little treat' to the fans. Take a look.


The Brooklyn Nine-Nine official Instagram and Twitter pages uploaded a "treat" for its fans and followers on April 6, 2021. The treat came in the form of a Brooklyn Nine-Nine Season 8 BTS picture. They captioned the picture on Instagram saying, “A little BTS of Season 8 as a treat”. The picture featured Stephanie Beatriz, Joe Truglio and Andy Samberg on the set of the show dressed as their characters. The only addition to their looks is perhaps the masks they all are wearing in keeping with the COVID-19 protocols.

The picture that has been uploaded is clicked by Stephanie Beatriz and is a selfie comprising of the three actors. They are standing in the middle of the set where the last 7 seasons of the show have been shot. The actors are all wearing their police badges in keeping with their character. Andy Samberg is standing with one hand on his hip and the other one on his ear while Jo is standing with his hands across his chest. Beatriz is showing the universal peace symbol to the camera. The actors are flaunting the idiosyncrasies of their character in the picture. 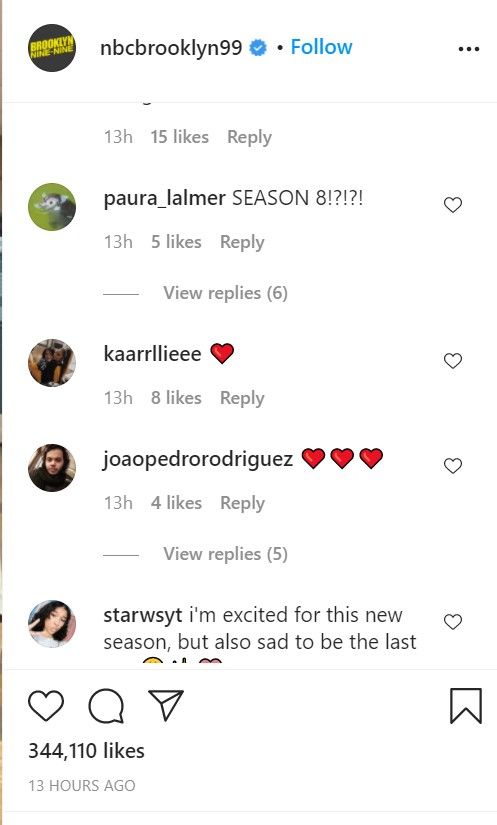 Fans of the show were really happy to see the Brooklyn Nine-Nine season 8 BTS picture. Most people said that it was great to see all of the characters together once again and said that they could not wait to watch the new season. Others said that while they were happy to see all of them, the picture was a reminder that the show was coming to a close soon. People were also excited to see that Jo Truglio was sporting a new hairstyle and complimented him on the same.

On April 5, 2021, the account posted pictures of the characters of the show dressed as bunnies but said that they were not just any bunnies but "heist bunnies". The first picture showed Melissa Fumero and Jo Truglio dressed in the white and blue bunny costume. The second showed Andy Samberg and Andre Braugher in the same costume but linked by a chain.