FRIENDS Reunion: Courteney Cox answers the question about her favourite episode besides "Thanksgiving". To which even Jennifer Aniston agrees. 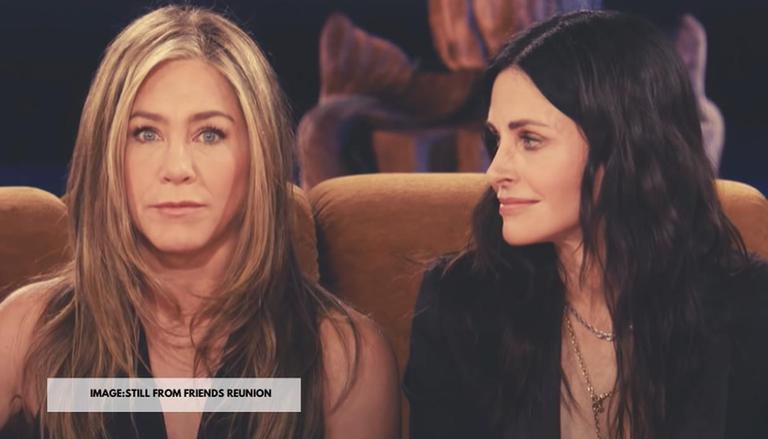 
The highly awaited reunion of the cast of the iconic sitcom FRIENDS has finally arrived. In the episode, fans saw Matthew Perry, Jennifer Aniston, Courtney Cox, David Schwimmer, Lisa Kudrow, and Matt LeBlanc exploring the set and reminiscing the memories from the time they recorded the episodes. This was followed by a conversation with host James Corden. He asked them questions about their favourite episode. Read what Courteney Cox had to say.

The FRIENDS reunion episode starts with the cast members reaching Stage 24, where they shot the whole series. They roamed around and talked about the memories from the early days. Later on, the cast is invited to sit on the iconic couch in front of the fountain where they shot the opening. Host James asked the cast about their favourite episode.

Courteney Cox replied that she loves the "Thanksgiving" episode. Other than this, she loves the quiz episode where they compete against the boys and how they lost the apartment. She also called the episode to be really "devastating and fun" because the girls lose the game. Rachel, aka Jennifer Aniston, who was sitting beside her, nods and agrees with her. The show then cuts to show a glimpse from the episode where Courtney aka Monica is heard saying "I can't believe that you think that you and Chandler know us better than Rachel and I do". It is followed by funny scenes from the episode. Further, the cast then plays the game again with a new set of questions.

READ | FRIENDS reunion: Reese Witherspoon reveals her reaction to Joey's 'How You Doing'

Quiz Episode - The One with the Embryos

The episode that Courteney mentioned was aired on January 15, 1998. In the episode, Phoebe agrees to become the surrogate mother to her brother's children. While she is in the hospital getting checked up for the embryos, the other members indulge in a quiz competition. The harmless game begins with Rachel saying that if they win, the boys will get rid of the rooster. In return, Chandler says that if they win, they will get the girls' apartment. The questions were prepared and asked by Ross, and in the end, the girls lose the game as they couldn't answer the question about Chandler's job.