Here Are Shows To Binge In October: Little Things, Special Ops 1.5, Jamtara 2 & Others

Amazon Prime, Netflix, Zee5, Disney+ Hotstar, & others have streamed several great web series which are binge worth. Here's a list of shows to watch in October. 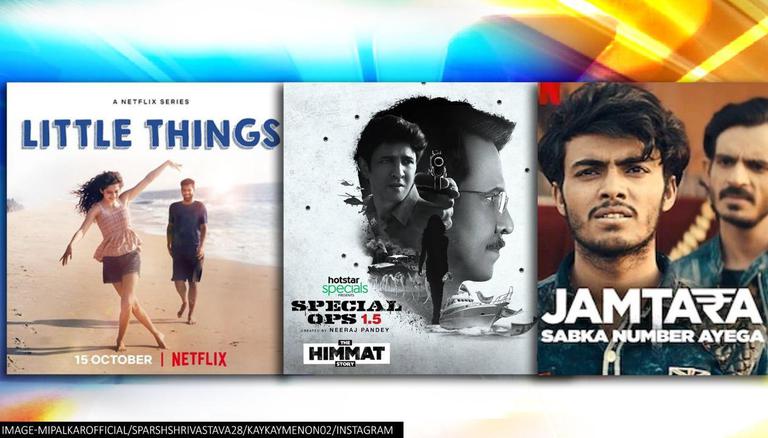 
As OTT platforms have gained a lot of momentum, especially during the lockdown, Indian web series became one of the prime sources of entertainment for the masses. Online streaming sites like Amazon Prime, Netflix, Zee5, Disney+ Hotstar, and others have streamed several great web series which are binge worth. It is time to mark calendars as these streaming sites have a list of promising series premiering on their sites that will keep you hooked to the screens. Here is the list of the latest Hindi shows on OTT platforms.

Shows to watch in October

Zee5 is currently gearing up to bring the untold story of Leander Paes-Mahesh Bhupathi in BreakPoint. The seven-part series showcases their accomplishments on the tennis courts and their on and off-court partnership. Filmmaker couple Ashwiny Iyer and Nitesh Tiwari will bring it to life on October 1. The trailer also features Saniya Mirza, Bob Bryan, Mike Bryan, and others.

Little Things' new season will be premiered on October 15. It follows a journey of a couple after the marriage. The series is created by Dhruv Sehgal, who also features in the series along with Mithali Palkar. The music is composed by by Prateek Kuhad and Neel Adhikari.

The online streaming giant already confirmed that the second part of its hit web series. Reports suggest the main cast- Amit Sial, Dibyendu Bhattacharya, Aksha Pardasany, and others will be reprising their roles in the new season which is expected to return to the small screen this month. The first season was one of the top most-watched series of Netflix because of its unique content that showed amusing phishing racket.

Helmed by Neeraj Pandey, the highly-anticipated series is expected to stream on the OTT platform by the end of this October. The web series features Kay Kay Menon as Himmat Singh and will consist of three episodes and further explain what happened in 2001. It will also explore the formative years of Himmat as the Raw Agent.

It's been a wonderful experience working on #SixSuspects!!! Always been a fan of @VikasSwarup 's writing. So happy to work with this dream team @dirtigmanshu @pratikg80 #RaghuSir et al. Thank you for this amazing opportunity @ajaydevgn 🙏🏽❤️😀 @pritisinha333 https://t.co/4wG3dgj0Ow

Richa Chadha and Pratik Gandhi starrer Six Suspects is helmed by Tigmanshu Dhulia. The crime murders story is based in Delhi. This also marks Chadha's first collaboration with Gandhi.

READ | 'Jamtara' season 2 officially on its way, Netflix says "our calls have been answered"

Inside Edge Season 3 will be premiering on Amazon Prime this month. Previous seasons were all about cricket and the second season ended with an exciting cliffhanger, leaving fans excited for the new season. Helmed by Kanishk Varma and the series stars Richa Chadha, Vivek Oberoi, and others. The series is backed by Ritesh Sidwani and Farhan Akhtar.

READ | Sparsh Shrivastava opens up on his journey to 'Jamtara', says ‘took long to get noticed’

Code M was a mystery drama that aired in July last year. The upcoming season depicts the journey of the military lawyer, Monica Mehra (essayed by Jennifer Winget) commanded by her mentor named Colonel Suryaveer Chauhan.