Karl Urban Flies Off To Shoot For The Boys Season 3; Fans Say 'best News In A Long Time'

The Boys is one of the most popular and most-watched shows for Amazon Prime Video. The Boys season 3 is set to go on floors soon. Read on to find more details.

The Boys is based on the comic-book series of the same name by Garth Ennis and Darick Robertson. The book is about a world in which superheroes, instead of being symbols of nobility and goodness, are reckless, violent and uncaring. A team of nobodies called The Boys take it upon themselves to keep the superheroes in line. The Boys is a show on Amazon Prime Video and its second season was a huge success. The third season is about to go on floors soon.

Karl Urban in The Boys Season 3

Karl Urban plays the lead role of Billy Butcher in the Amazon Prime series. He recently took to Instagram and shared that he is off to shoot for season 3. He made the announcement by posting a photo in which he is seen wearing a mask sitting inside an aeroplane that is departing from New Zealand to Canada where he will be filming for The Boys season 3.

As soon as Karl Urban posted the picture on Instagram announcing the news, his comment section was flooded. The netizens were delighted with the news that the third season is finally going on floors and they cannot wait to watch it. Check out some of the comments below; 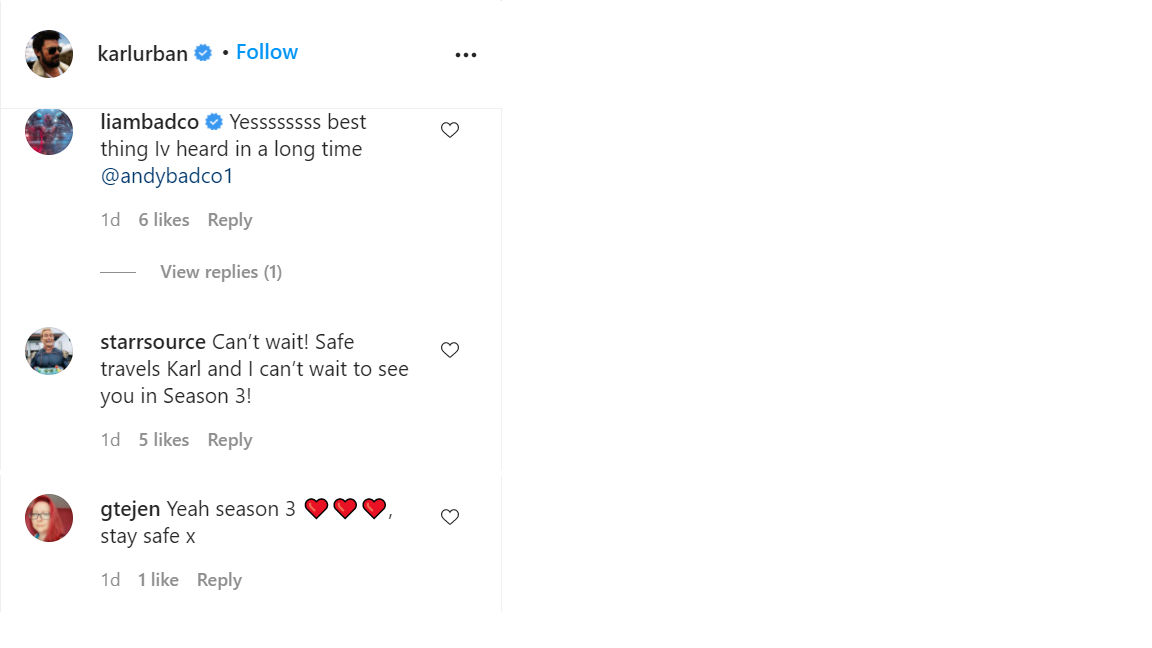 The Boys season 3 cast includes Karl Urban, Jack Quaid, Tomer Capon, Laz Alonso, Karen Fukuhara as The Boys. The team of superheroes called The Seven include Antony Starr, Dominique McElligott, Erin Moriarty, Jessie Usher and Nathan Mitchell. According to Deadline, Claudia Doumit and Colby Minifie have been promoted to series regular and will be seen in the third season. The newest addition to the cast is the Supernatural fame actor Jensen Ackles, as Soldier Boy.

The plot of The Boys season 3 will mostly be revolving around the story of Soldier Boy says TV Guide. During a roundtable interview, director Eric Kripke teased that The Boys season 3 may include a lot of conversations about Covid-19 and the US governments response to it.

The Boys is one of the most-watched series for Amazon Prime Video, breaking a number of records in its second season. The Boys has been critically acclaimed and has a 97 per cent score on Rotten Tomatoes.