Kirti Kulhari recently bought a brand-new Royal Enfield Classic 350 motorcycle. She shared her excitement on social media through pictures along with a note. 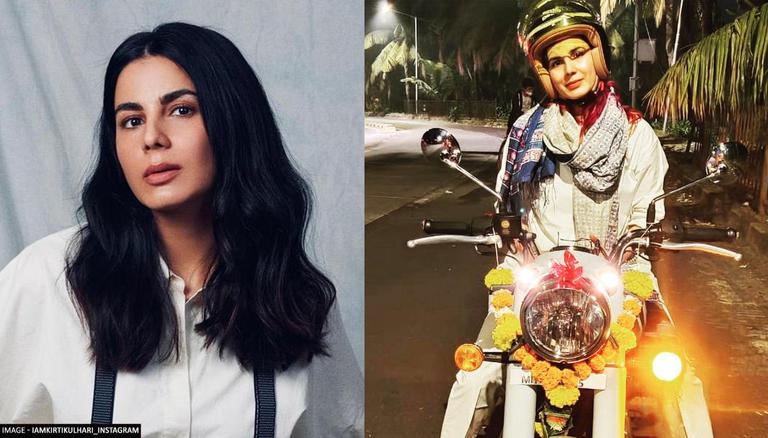 
Bollywood actor Kirti Kulhari recently bought a brand-new Royal Enfield Classic 350 motorcycle. The actor who is known to portray roles in films like Uri: The Surgical Strike, Mission Mangal, Four More Shots Please and more, took to her Instagram page and shared a bunch of pictures and videos while giving a warm welcome to her new bike.

It is Kulhari's first motorcycle ever and she has opted for the Classic 350 in a Halycon Grey colour. The first few pictures showed Kirti posing with her new bike while the videos gave a glimpse of the actor performing the puja and thanking all fans for their love as she purchased the bike with her hard earned money.

The actor called the moment ‘special’ because she never saw herself as a person who would own a bike in her life. Penning an optimistic note while encouraging others, she wrote, “This is special.. this is truly a special moment for me because I never saw myself as someone who would ever own a bike or be called a #biker … but here I am with this beauty #royalenfield #classic350. Looking forward to all that lies ahead…"

READ | Kirti Kulhari says 'Marriage, as a concept, is overrated' on separation from Saahil Sehgal

Adding further, she wrote, “P.S - Life is truly unpredictable and if u can keep yourself open to all the plans that #life has for u ( good, bad and ugly ), then you are in  for #therideofyourlife #neverletanyonetakeyouforaride Thank u @royalenfield @ishnawheels.”

Her fans were quick to hail the actor for her choice while the rest called her "Bullet Rani". "Congratulations on your first bullet", while another wrote, "Congratulations, now Ladakh tour is final." A third user chimed in and wrote, "Full-on Royal Enfield Baazi. More power to you Kriti Ma'am". Another echoed similar sentiments and wrote, “Congratulations @iamkirtikulhari…it's as beautiful as you.”

For the unversed, Kirti Kulhari has separated from her husband Saahil Sehgal. The couple had been married for close to five years now. The actor had shared her statement on social media and revealed that they have decided to separate ‘not on papers, but in life’. The Pink actor said that while the 'decision is not meant to be easy, it is what it is'. Kirti further shared she was in a good place, ‘and hoped everyone who matters in my life is too’. The Criminal Justice 2 actor, in a parting note, added that she will not be commenting any further on the matter. "Upward and onward, always," she signed off.

WE RECOMMEND
Kirti Kulhari talks about how 'Shaadistan' highlights social conditioning
Did you notice Sahil Sehgal in 'Four More Shots Please' with estranged wife Kirti Kulhari?
Kirti Kulhari opens up about ending her marriage, calls it a 'tough decision'
Kirti Kulhari on Shaadisthan - 'I want to leave people with fresh perspective'
Kirti Kulhari's adorable niece gets 'acting lessons' as Zoe is 'doing what she does best'
Listen to the latest songs, only on JioSaavn.com