‘Money Heist’ Season 5: The Professor And Berlin Discuss How They Feel About Finale

In a recent video, Money Heist’s Alvaro Morte and Pedro Alonso discuss if they are sad about the finale. The first part of season 5 will premiere on September 3 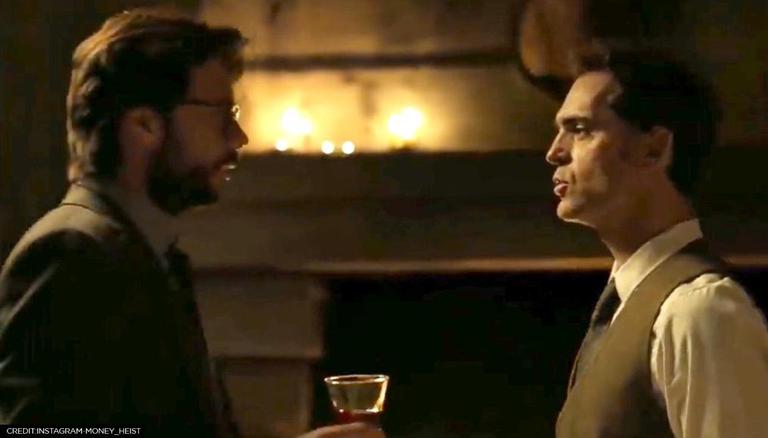 
In a recent video uploaded by the Money Heist team on YouTube, fans can see Money Heist actors Alvaro Morte and Pedro Alonso speaking about their current state of mind. The actors take on the roles of Sergio, more famously called The Professor and Berlin respectively, on the Netflix show. In the recent video, Morte can be seen saying that despite the show ending with the upcoming season 5, he is not ‘mourning’.

La Casa De Papel was originally meant for Spanish TV, however, Netflix bought its rights and made it Money Heist, which enjoys a massive fan base across the globe. In the video posted on the official YouTube channel, Alvaro Morte speaks to Pedro Alonso about how he is not mourning the end of the much-loved show, as he did so when season 2 came to an end. He said, “For me, it’s like half the process because when we finished the second season, where things were supposed to end, that’s where I went through a big mourning. Because in theory, that wasn’t going to have any kind of continuity. It ended there. Also, they were two very well-closed series, very well rounded and definitely to end.”

Money Heist was meant to end after season 2, which took place in the Royal Mint of Spain. However, witnessing the love the show received, Netflix greenlit the show for yet another season, which revolved around a robbery at the Bank of Spain. The cast members were asked to come together again to shoot the subsequent seasons of the show.

READ | 'Money Heist' season 5 to have a lot of tension & action, says Álvaro Morte aka Professor

In the YouTube video, Alvaro also speaks about what it was like going back to shoot the third season of the show. He said, “When they told us, we are coming back, it was like getting back a loved one that you had once lost. That’s why my attitude during these three seasons was more from the perspective of enjoying and having a second chance with this character.”

The official Instagram account of the show also released a brand new poster. The caption of the poster reads, "The final battle awaits us." Money Heist 5 will be divided into two parts, with the first one premiering on September 3.

WE RECOMMEND
Was 'Money Heist' a flop in Spain until Netflix bought it? Read details
'All American Season 4': Read about its Netflix release, cast & what to expect from show
'Money Heist' Season 5 Trailer released; Netflix puts in synopsis to show's finale
'Dash And Lily' Season 2: Everything we know about Netflix's Christmas rom-com series
'Avatar: The Last Airbender': Netflix finalises cast, crew for Live-action adaptation