My Hero Academia season 5 episode 10 spoilers are out. Check out what happens in the latest episode as Izuku Midoriya unleashes a new blackwhip. Know details. 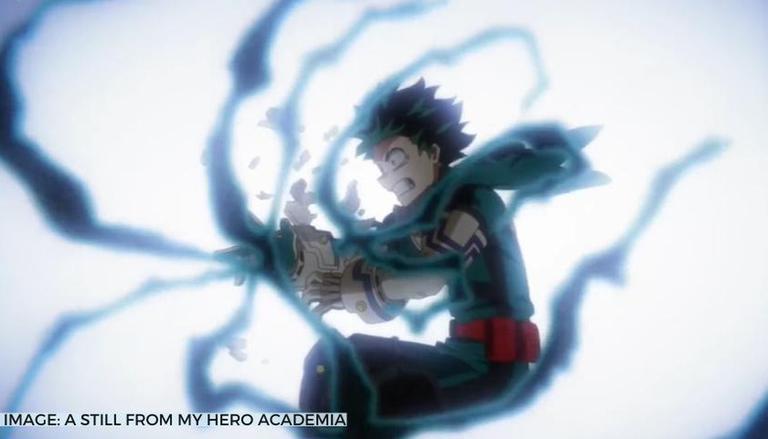 IMAGE: A STILL FROM MY HERO ACADEMIA


My Hero Academia is a superhero manga series. The fantasy adventure show has received immense praises over the years. Now, a new episode has been dropped by the makers. Know My Hero Academia season 5 episode 10 spoilers.

The latest episode starts in the prison where All For One is being kept. The guards comment on how Gran Torino's discovery of the villain Gigantomachia, a devout follower of All For One, hints that there could be other sympathizers waiting. Somehow, All For One overhears this conversation and laughs eerily, then apologizing sarcastically for causing trouble.

At U.A.'s training grounds, All Might gets a phone call from Gran Torino, who recalls a conversation he had with Nana Shimura.  She talked about a dream in which the dark, blurry shadow informs her "the time has not yet come," not knowing who it was. The phrase made All Might realize that something important is yet to arrive for One for All and Midoriya.

On the other hand, the match begins, and Midoriya, Uraraka, Ashido, and Mineta follow a relatively same strategy as Bakugo.  Elsewhere, Shinso and Monoma address their similarities. Both have Quirks that do not immediately link with heroes. However, the two share what Monoma describes as the burden of their youthful hopes and dreams but cannot help their desire to be heroes.

READ | John Cena shares 'My Hero Academia' poster; fans wonder if he will voice a character?

Midoriya meets a solitary Monoma while leaping around a maze of pipes. He taunts Midoriyoa and his team's strategy. Monoma assures that he would defeat them. As Midoriya is distracted, the rest of Monoma's team, except Shinso, focus on the former's squad who gets themselves in trouble. Monoma's team uses their powers which leads to a flung projectiles. As the area collapses around everyone barely escapes.

Midoriya gets irritated with Monoma's taunting. The insults make Midoriya angry, but One For All unleashes entirely new energy as he attempts to attack. The young hero grows a mass of dark energy whips which seem to be out of his control. The black whip destroys everything they touch, and All Might goes over to Vlad and Aizawa to ask them to stop the match.

Uraraka calms down Midorya. She has a brief flashback to her childhood and tells her story to Midorya. Uraraka shouts to Shinso to use Brainwashing on Midoriya, and after hesitating initially, he's able to ensnare the out-of-control hero successfully. Once again, Shinso's Quirk triggers something in Midoriya.

He finds himself back in the One For All dreamworld and face-to-face with one of Quirk's previous users. It is a unique moment as the brash hero is a real human being. The predecessor tells Midoriya that the whips of energy are his Quirk, Blackwhip. The unknown hero explains that the powers and how should handle them.

READ | 'My Hero Academia': Here is what you need to know about 'One For All' lineage users

Uraraka slaps Midoriya which brings him back to reality, breaking Shinso's Brainwashing. As his power is now under control, Midoriya feels guilty when he sees Uraraka's injuries from the chaotic experience. But the battle is still on as Aizawa decides to let the fight continue, however, All Might is worried.

IMAGE: A STILL FROM MY HERO ACADEMIA