'Narcos: Mexico' Season 3: Here's All We Know About Plot, Cast, And Premiere

As the third season of 'Narcos: Mexico' premieres today, here's everything you should know about the show's plot details, ensemble cast and more. 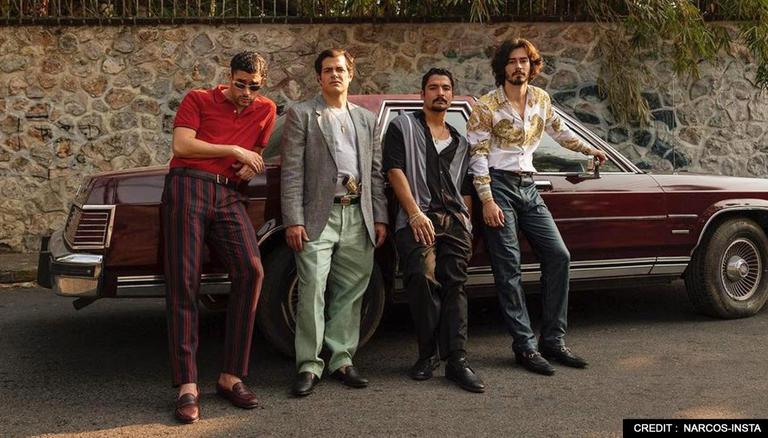 
Netflix's crime drama Narcos: Mexico is back with its third and instalment, which promises to be packed with violence, drug busts, gun battles and more. The new season will feature superstar Bad Bunny with actors like  Luis Gerardo Méndez, Alberto Guerra and Luisa Rubino set to mark their appearances in the upcoming episodes. The action-packed scenes will commence after Miguel Ángel Félix Gallardo's arrest, with new cartels attempting a takeover.

With Félix (Diego Luna) behind bars for the murder of DEA Agent Enrique Camarena, the events of the latest season are set to peak the adrenaline levels of the show's ardent fans. Continue reading to know more about Narcos: Mexico's premiere date, cast and plot details.

The latest season has started premiering on Friday, November 5 via Netflix. The third season comprises 10 episodes, averaging around 50 to 60 minutes each. The majority of the show's ensemble cast has reprised their roles in the latest instalment, however,  Diego Luna hasn't returned in the finale season. The other cast members include:

Coming as a spinoff to Narcos, which showcased Pablo Escobar’s journey as Colombia’s drug lord, the Mexico version charts the origin of the modern drug wars in the country. The first two seasons focused on the rise of the Guadalajara Cartel in the 1980s, with Luna playing the role of Gallardo. The latest season, however, dwells on the history of what happened when Gallardo wasn't in the picture. Its key message is to convey that although players operating in the system may change on an everyday basis, the system guiding them remains stays all but intact all these decades later.

Its official synopsis on Netflix reads,