Prachi Desai took to her Instagram on Wednesday to share the teaser of her much-awaited comeback movie Silence Can You Hear It, starring Manoj Bajpayee & others

The teaser for Prachi Desai's comeback movie Silence Can You Hear It is finally out. Desai took to her Instagram handle on Wednesday, March 10, 2021, to share the teaser of the thriller film. In the 54-second long teaser, Manoj Bajpayee was seen as an ACP who is trying to solve the murder-mystery of Barkha Singh who is playing the role of the daughter of retired Justice and is found dead in the woods. Manoj Bajpayee's character was seen questioning Arjun Mathur for the murder in the teaser. Prachi Desai was seen shooting bullets fiercely like a police officer. The entire Silence teaser did not have any dialogues and in the end, Manoj Bajpayee says, "Har khamoshi mein zuban nahi hoti", which showed the significance of the word silence. Prachi Desai wrote in the caption 'Witnesses' with a cross mark emoticon and 'Meticulous Minds', 'Determined Detectives' both with right tick emoticons. She further added "Will the case be solved? Silence Can You Hear It Premieres 26th March on Zee Premium."

As soon as Prachi Desai uploaded the Silence teaser to her Instagram feed, her fans were thrilled by her much-awaited comeback. One of the followers wrote "this is dope!" in a comment to which Desai replied with a fist-bump. Musical artist Dushyant Kapoor wrote "congratulations" to which Prachi replied "thank you" with joining hands emoticon. Her fans commented on her comeback and one of them wrote: "My queen is back with a bang", while another wrote, "All the best inspector Sanjana Bhatia Mam" referring to her role in the movie. Her followers also complimented the trailer and wrote "thrilling", "I can't wait" and many added fire, red heart, and heart eyes face emoticons in the comment section. Read comments here- 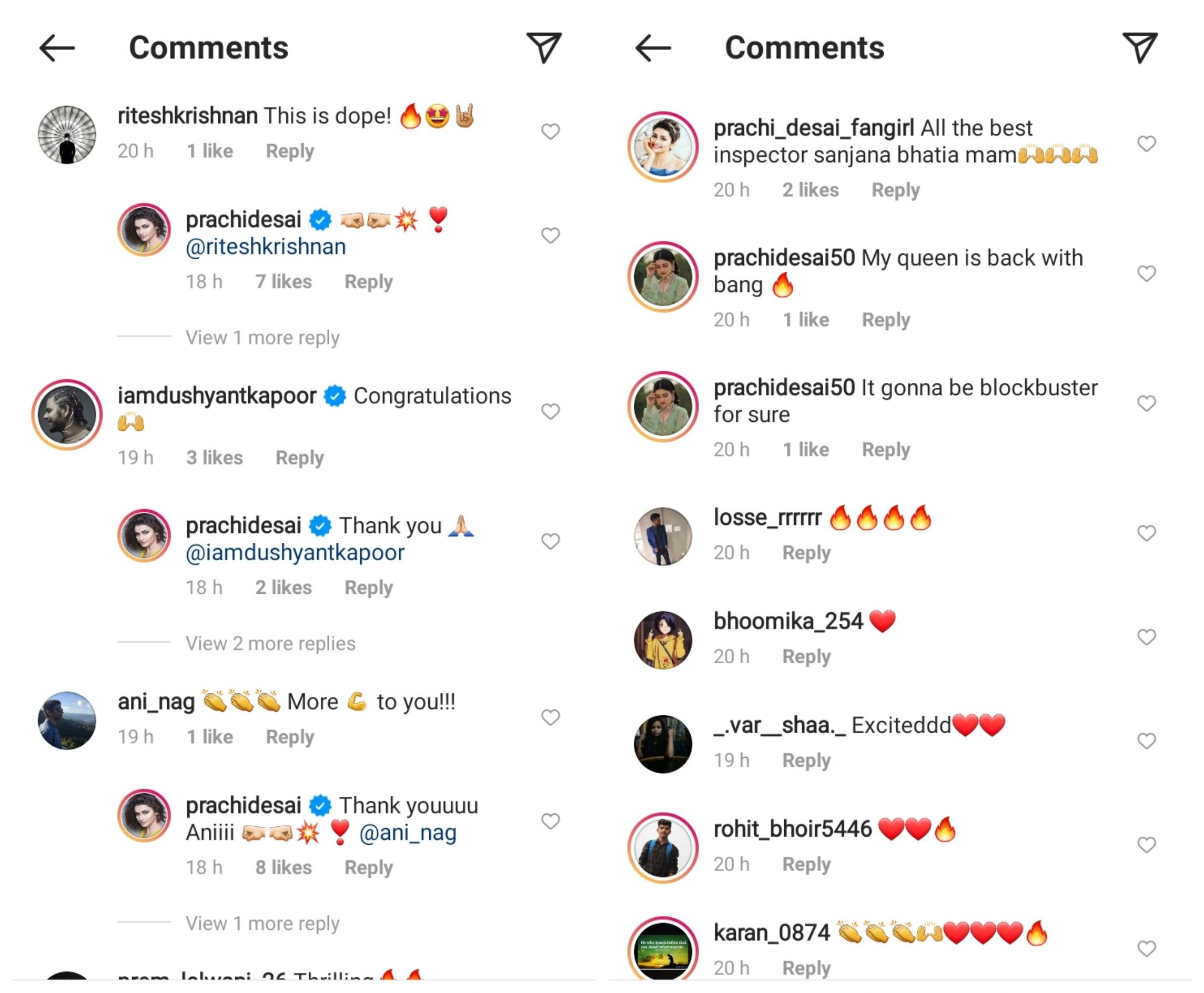 Prachi Desai gained recognition for her role of 'Bani' in Ekta Kapoor's television drama Kasam Se opposite Ram Kapoor in 2006. She won several awards for the show including Indian Telly Awards for Best Actress in the lead role. She made her Bollywood debut with the film Rock On!! opposite Farhan Akhtar in 2008. In 2012 she appeared in a lead role in Bol Bachchan opposite Abhishek Bachchan along with Ajay Devgan and Asin. The film was both a critical and commercial success and grossed â‚¹235 crores worldwide and became Desai's biggest box office success to date  Some of the other popular Prachi Desai's movies include Life Partner, Teri Meri Kahaani, Carbon, I, Me Aur Main, Policegiri, Once Upon A Time In Mumbaai, Azhar, and  Rock On 2.

READ | Prachi Desai injures herself while filming action sequence for 'Silence: Can You Hear It?'

Promo Image Source: Prachi Desai's Instagram & a Still from Silence Can You Hear It teaser