Prajakta Koli's Instagram stories section sees the YouTuber/Actor getting teary-eyed after receiving a compliment from Parineeti Chopra. Read On.

The Girl On The Train's Parineeti Chopra took to Instagram in order to praise one of the skit videos made by Prajakta Koli, who is more commonly known by her online name, MostlySane. The snippet that can be seen below sees the Sandeep Aur Pinky Faraar actor saying "Why so talented?". To the same, Prajakta Koli responded with a teary-eyed emoji. 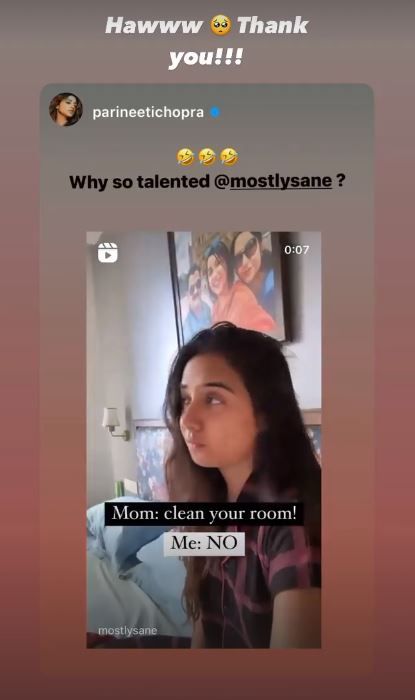 As far as Prajakta Koli's professional commitments are concerned, the actor was most recently seen essaying the character of Dimple Ahuja in the Netflix original series, titled Mismatched. Prajakta Koli's Mismatched is based on a novel that goes by the name of When Dimple Met Rishi by Sandhya Menon. The 6-part-long series in question is directed by Akarsh Khurana (Karwaan/High Jack) in collaboration with Nipun Dharmadhikari. Apart from Prajakta Koli, the series also stars the likes of Rohit Saraf, Rannvijay Singha, and Vidya Malavade, to name a few.

Mismatched, a show which has officially received a Season 2 order from Netflix, was produced by Ronnie Screwvala under his maiden banner that goes by the name of RSVP Movies. Additionally, Prajakta Koli recently wrapped up filming her parts for the Varun Dhawan and Kiara Advani-starrer Jugg Jugg Jeeyo. The feature presentation in question also stars the likes of Anil Kapoor and Neetu Singh Kapoor, who is returning to the screen after the better part of a decade and for the first time since the passing of Rishi Kapoor. The film in question is directed by Raj Mehta. More details concerning the same will be revealed as and when Prajakta Koli or her representatives divulge them.

As far as Parineeti Chopra is concerned, her most recent release, The Girl On The Train, opened to mixed reviews. Additionally, the actor quite recently revealed a teaser of her upcoming film, Saina. Saina is a biopic based on the life of renowned badminton player Saina Nehwal. The same can be found below.

The teaser of Parineeti Chopra's Saina:

Also Read: Prajakta Mali To Feature In A Travel Show That Tours All Over Maharashtra