What To Watch In August: From Brooklyn Nine-Nine To Shershaah Watch This On OTT This Month

What to watch in August: The OTT platforms have a new set of series and movies to binge-watch, including Modern Love, Brooklyn Nine-Nine, Shershaah and more. 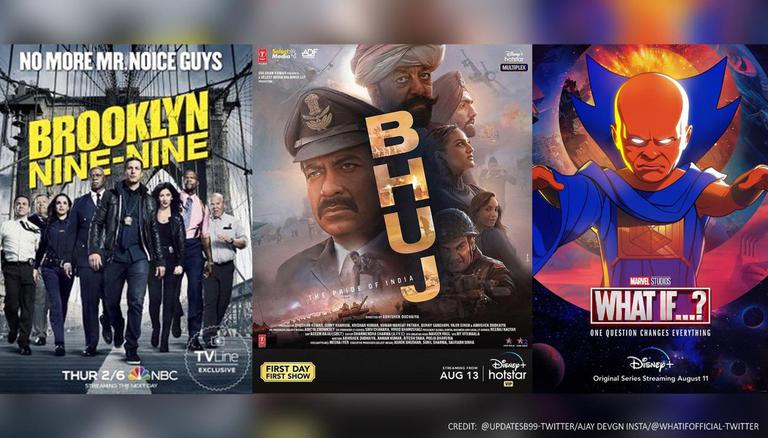 
The month of August has brought in splendid shows, films and series for all age audiences slated to release in the digital space this week. The hot, brewing content ranges from action, romance to science fiction including Brooklyn Nine-Nine, Bhuj: The Pride Of India, Modern love among others. Take a note of the latest fleshed out OTT content.

The Jeffrey Wright starrer follows the creation of the multiverse at the end of Loki’s first season finale. Helmed by  Bryan Andrews, the series explores the various timelines of the multiverse in which the pertinent moments from the Marvel Cinematic Universe films occur in a different manner.

Bhuj: The Pride of India (film on Disney+ Hotstar, August 13)

The Ajay Devgn, Sanjay Dutt, Sonakshi Sinha, Nora Fatehi starrer is based 1971 Indo-Pak war when the IAF airstrip at Bhuj was destroyed in combat. The movie, helmed by Abhishek Dudhaiya will showcase the pivotal moment of restructuring the Airbase, led by 300 local women from Gujarat and IAF squadron leader Vijay Karnik, that ultimately helped India win the war.

A post shared by BHUJ - The Pride of India (@bhujfilm)

Directed by Eric Goldberg, Series of four Walt Disney Animation Studios’ shorts will throw light on how to wear a mask, how to cook, how to binge-watch, and long play among other things.

This biographical war action film starring Siddharth Malhotra, Kiara Advani is based on real events pertaining to the 1999 Kargil war. It follows the journey of Param Vir Chakra awardee and army captain Vikram Batra who was martyred fighting for the motherland. The movie is directed by Vishnuvardhan

Helmed by  Hideaki Anno, it is the fourth and final chapter of the Japanese animated science fiction film series of the Neon Genesis Evangelion franchise.

READ | 'Brooklyn nine nine' final season gets a release date: Netizens say they are not ready