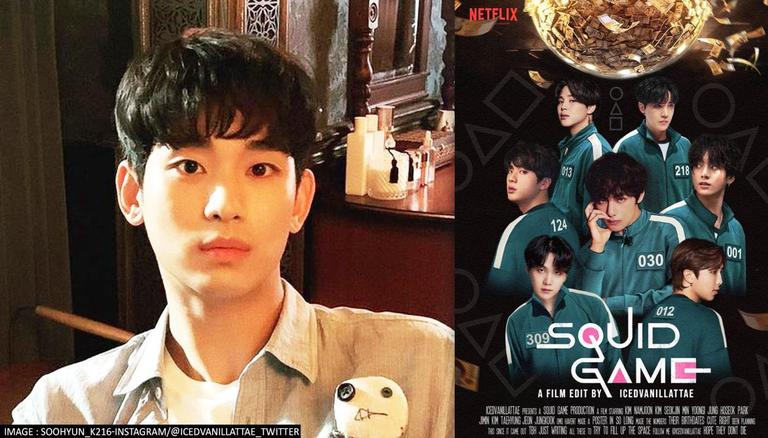 
South Korean drama Squid Game has taken the online streaming giant, Netflix by storm. The mysterious survival K-drama is receiving rave reviews and terrific responses on the streamer and has transcended cultures and language barriers to reach No. 1 in 90 countries in 10 days, from Qatar and Oman to Ecuador and Bolivia. The Korean drama originally premiered on 17 September 2021 on the OTT platform.

Kim Soo Hyun jokes he could have appeared on Squid Game

Squid Game follows the story of four hundred and fifty-six people, who have all struggled financially in life and are invited to play a mysterious survival competition. Competing in a series of traditional children's games but with deadly twists, they risk their lives to compete for huge prize money.

On October 2, FTISLAND’s Lee Hong Ki took to his official Instagram handle and dropped a picture shared by It's Okay Not To Be Okay star Kim Soo Hyun on IG stories. Hong Ki captioned on top of the image, "He sent me this photo saying he could have appeared [on ‘Squid Game’] too… haha hyung.. then you would have been the first one to die hahaha." According to Soompi, Kim Soo Hyun, and Lee Hong Ki are known to be close friends.

The pictures shared are still snaps from Squid Game photoshopped with screengrabs of Soo Hyun's earlier cameo appearance from tvN's Crash Landing On You as his character Won Ryu Hwan from 2013's film, Secretly, Greatly. In the film, Ryu Hwan plays a North Korean spy who is deployed to South Korea, where he pretends to be the village person, Bang Dong Goo. His character is always seen wearing his trademark green tracksuit. Soo Hyun's character blends well with the Squid Game actors who also sport green.

Meanwhile, as per reports from Soompi, the K-drama's creator Hwang Dong-hyuk came up with the idea for the show more than a decade ago when he was living with his mother and grandmother. Dong-hyuk had to stop writing the script at one point and was forced to sell his $675 laptop for cash. During the time, potential investors and actors bristled at the brutal killings and implausibility of individuals competing to the death to earn money. However, later Netflix thought the class struggles shown in the series spoke about reality and thus adopted the series.