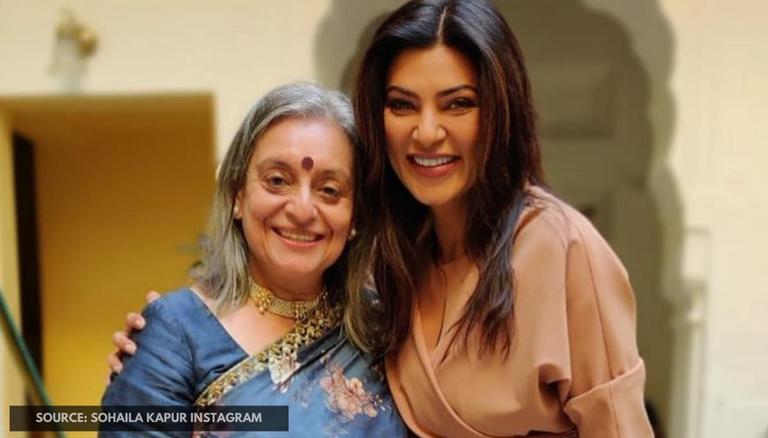 On popular demand, the Hotstar Specials show, Aarya was renewed by the makers of the crime thriller for a second season, later last month. After kicking off its shoot, Sushmita Sen has been sharing pictures from the sets of the upcoming season from Jaipur on Instagram to hike fans' excitement about Aarya 2. Now, Sushmita's reel-life mother Sohaila Kapur recently reunited with her on Aarya 2's set, revealed the former by sharing a picture with the latter from the first day of her shoot.

Ever since its premiere on Disney+Hotstar back in June last year, Aarya has been basking in heaps of praise by critics as well as the masses. Sushmita Sen also went on to bag four awards for her exemplary performance as Aarya in this Ram Madhvani and Sandeep Modi directorial, i.e. the Filmfare Award, the Critics' Choice Award, the Dadasaheb Phalke Award and the Raj Kapoor Award. As a result of the overwhelming response, the makers announced Aarya's second season and also commenced its shoot on March 1, 2021.

Now, joining Sushmita Sen on the sets of Aarya 2 in Jaipur is her on-screen mother, Sohaila Kapur. Yesterday, i.e. March 9, 2021, Sohaila, who essayed the role of Rajeshwari in Aarya, took to her Instagram handle to give fans a peek into her first day of shoot for the upcoming season of Sushmita Sen's debut series. In the picture shared by her, the reel-life mother-daughter duo were all smiles for the camera as Sushmita posed in a nude dress cinched at the waist while Sohaila rocked a sheer blue saree with floral print details. Sharing the picture on her Instagram handle, the veteran actor wrote, "Happy family reunion! As Rajeshwari with Aarya, in Season 2. A resurgent Sush with four awards under her belt for Aarya...Filmfare, Dadasahib Phalke, Critics' Award & the Raj Kapoor Award for Best Actor. Four more after Season 2....?"

On the other hand, a couple of days ago, Sushmita Sen took to her Instagram handle to share a candid photograph of herself from Aarya 2's sets. Along with posting the picture shot by Frank Ahalpara, she also penned a heartfelt note on Instagram. Have a look: